Attended a Pau making workshop conducted by Chef Valerie Kong at Shermay's Cooking School the past Saturday. And boy I had so much fun! It's been a while since I last attended any hands-on class and I was really looking forward to this one. I'm hopeless in pleating pau skin (tried before) and hence wish to get some practical tips from Chef Valerie.
The recipe pack included the basic dough, sweet and savoury fillings of red bean (tau sar), chicken and vegetable, as well as bonus recipes on Char Siew Pau, Egg Yolks Custard Pau, Tua Pau and Lotus Bean Paste Longevity Pau.
Chef Valerie first demo-ed the steps in preparing the steamer which is crucial in ensuring that the paus are well-steamed; followed by the three fillings. 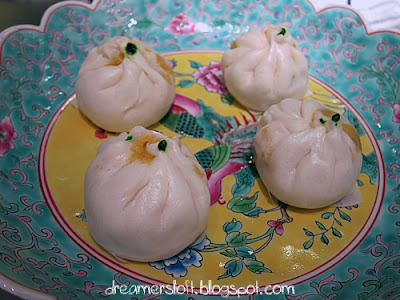 Vegetable Pau is supposedly the easiest among the three Paus that we were attempting, in terms of the wrapping. Preparing and frying the vegetable was pretty straightfoward, the filling could also be used for wrapping spring roll. 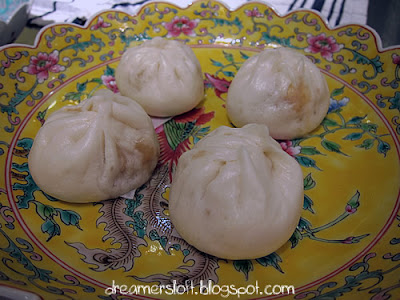 Followed by Chicken Pau, which even included half a quail's egg. The essential step in preparing the meat filling was 'whacking' the meat to tenderise it. 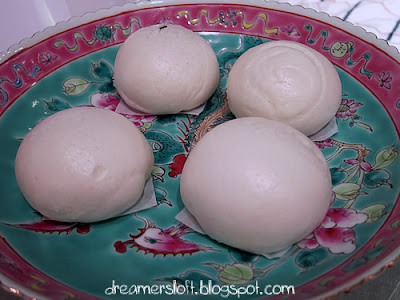 Don't underestimate the simple, plain looking Red Bean (Tau Sar) Pau. The filling was the hardest and most tedious to prepare, and wrapping the filling was no mean feat! It was even harder than pleating the Veg and Meat Pau, if not wrapped properly, the filling would burst out of the skin during steaming. You'll see how later.

Finally, action time! Chef Valerie first went through with us the weighing of ingredients followed by kneading the dough. Then it's our turn. I would say preparing the dough was rather easy, all you need is to combine the ingredients (carefully), and then put your heart and soul (and strength) into kneading the dough. At first the dough looked rough but after a good kneading of 10 minutes, it became as smooth as a baby's buttocks :p

After that, we let our dough proof while Chef Valerie demo-ed how to wrap the three types of filling. 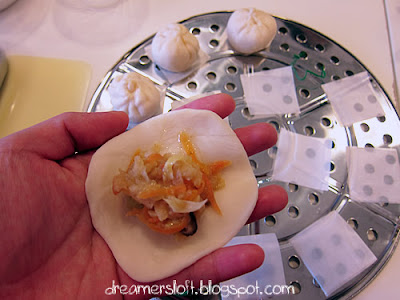 Like I said earlier, the Vegetable Pau was the easiest to wrap. Actually, I thought the Chicken Pau was easier as the filling was firmer and drier to wrap. The veg filling was oozing with sauce hence quite difficult to pleat properly. The advice was to avoid scooping too much liquid or to squeeze the veg a little before wrapping. 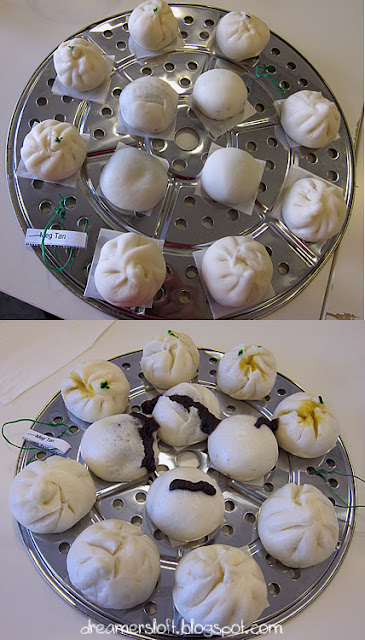 Tadah, the top photo was my wrapped Paus before steaming and the bottom photo after steaming. The Red Bean Pau looked alright before steaming but actually I stretched the skin too much during wrapping so the red bean burst out of the skin during steaming, resulting in the ugly looking buns :( For the Veg Pau, the liquid oozed out a little and stained the skin :( The Chicken Pau looked the 'most presentable' of the lot :) 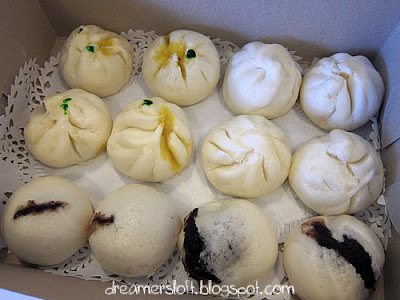 Nonetheless, not bad for a first timer right? At least I learnt how to pleat the skin properly. With more practice, my Paus could possibly improve in appearance next time? 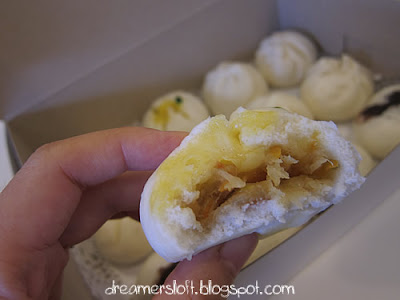 What mattered at that point was the taste :p Hmmm, the Veg Pau was yummy! The bun was soft and fluffy (my labour of love was worth it) and veg filling savoury. 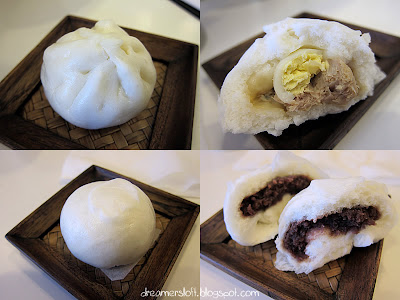 We also tried the Chicken and Red Bean Paus made by Chef Valerie during the class. The buns tasted great even when cold. Nothing beats home-made buns! Definitely going to try making them one of these days!
Posted by daydreamer at 1:53 PM