I can't believe March is coming to an end soon, one month gone past just like that. But the thing is I don't know how I managed to survive this long lasting month. I mean, so many things happened and I was literally dragging myself through and no mood to do anything. Spent the first week of March trying to manage a cranky toddler (due to our travel to Koh Samui end Feb which disrupted his daily routine).

And just as hubby and I were counting down to our long-anticipated vacation (without dear son) to Tokyo end March, the earthquake and tsunami hit Japan. Initially we were still thinking of making the trip since Tokyo wasn't really affected. But as the hours passed, bad news kept looming in, with the most worrisome being a possible nuclear meltdown at the tsunami-stricken Fukushima Daiichi Nuclear Plant. Reluctant to give up my trip, I monitored the situation via all channels like news, internet, twitter, blogs, forums etc very closely. My perpetual need to scan the news and Internet for reasons not to worry daily almost drove me crazy. For two weeks, I was constantly on tenterhooks and battling with myself to abort this trip which had been my motivation for so long. I wanted to go Tokyo so badly!

In the end, we decided it was no-go for Tokyo (due to shortened shop operating hours, limited train service, the Japan International Fishing Show cancelled - reason why we were making the trip in the first place) and started exploring other areas such as Osaka, Taiwan, Hong Kong... and finally settled for Bangkok. Why Bangkok? Hubby launched into his theory - if worst case scenario there was a nuclear meltdown/explosion, radiation could travel as far as 3000km radius of Japan, which makes all those areas dangerous. Ok, fine, whatever, I was too weary to think. I just wanted to get away. So to Bangkok then. Shall update about the Koh Samui and Bangkok when I have the time and mood. Watching all the news and videos of the earthquake and tsunami made me feel so sad about the plight of those affected, yet an even greater respect for the Japanese who demonstrated true courage and resilience. I love Japan!

Anyways, amidst all the saga, I celebrated my 33rd 34th (gosh, I totally lost track of my own age! LOL! Only realised after a friend prompted me :p) birthday. Well, nothing fanciful, just a quiet me-day that's all, which was what I needed. Birthdays and age don't seem all that important now, do they?

Ok, enough of my ramblings. I now sincerely pray that situation in Japan would improve coz I have another trip to Tokyo (to attend a Shinto Wedding) in May. Please?? Please!!!
Posted by daydreamer at 9:46 PM 3 comments:

Just a quick post here since I've been soooo slacked this March (for good excuses reasons which I would ramble share soon).

Dear son is getting sick of eating porridge and more keen in rice these days. Usually I would prepare some soup with rice for him but today decided to try something new - Salmon Fried Rice. I love fried rice for its versatility and simplicity, could be whipped up with any ingredients found in the fridge/pantry. I used fresh salmon, summer squash, tomato and broccoli and viola, an easy and balanced one dish meal for him.

Initially I was worried that he might not like it since he prefers to have rice with soup, but surprisingly he took to it quite well. I tasted it and loved it too. The portion was about 3/4 bowl and he finished more than 1/2 bowl (which was considered quite good since he usually eats 3/4 bowl of porridge and rice is more filling). All that was left was this spoonful. No time to take a shot after cooking since I had a hungry toddler waiting for his food impatiently. Next time, I could fry more for myself too. 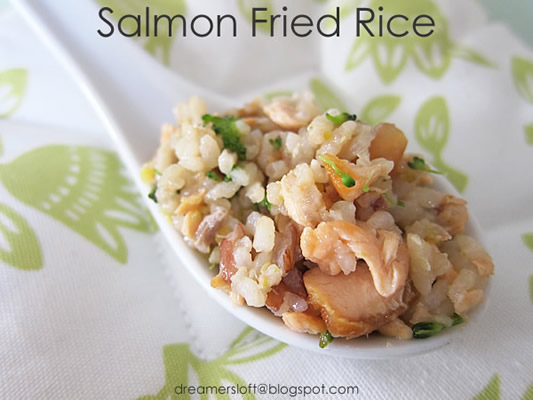 I think I mentioned before that my favourite chicken part is the chicken wings; affirmed by several of my past blog entries. Yes, I know it is the most fattening and sinful part, but I really couldn't give it up.

Came across this recipe at Steamy Kitchen's blog described as "one of the very best chicken wings I’ve ever laid lips on". Wow! One glance at the ingredients and the tantalising photo, I was convinced and tempted to try.

Basically quite an easy recipe, the tedious part was the chopping of the garlic and ginger till very fine. And oh, I used the small chilli padi (my first time handling!) and man, I was literally tearing and sneezing all the way while cutting these fiery little devils! Much more potent than onions. Worse, my fingers burnt for a few hours thereafter :(

I followed the recipe, except the baking duration. After baking for 20 minutes as indicated, the wings didn't look brown enough, so I baked them for another 20 minutes. Mine looked 'plump and juicy' whereas hers look a tad drier. Not sure if grill mode was used? 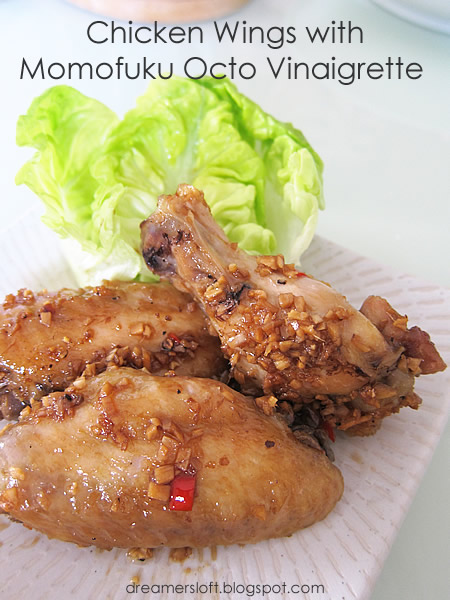 Anyway, the verdict, the vinaigrette was really appetising, tangy, spicy, sweet, saltish, fragrant... good with white rice and some romaine lettuce. Beware of dragon's breath thereafter though since lots of garlic were used! If interested to give it a try, hop over the Steamy Kitchen for the recipe :)
Posted by daydreamer at 11:24 PM 1 comment: