Happened to be at Ngee Ann City on a Monday night and decided to pop into Pasta Cafe for dinner since there wasn't a queue. This Jap-Italian fusion cafe seems to be rather popular; there is a perpetual queue during weekends. I guess it should be quite good?

Not exactly a huge fan of pasta; what attracted me was the Combo promotion which consisted of an appertiser, a spaghetti and a gratin for $22.90++. I always like ordering small portions of food with more variety, so this suited me fine. 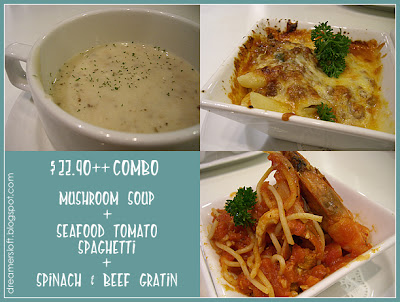 My choices were mushroom soup, seafood tomato spaghetti and spinach & beef gratin. I quite enjoyed the mushroom soup; it was creamy with bits of chewy mushroom but a tad bland. The spaghetti and seafood was ok, though the tomato sauce was a little diluted. I liked the spinach and beef gratin which was piping hot with generous amount of cheese. 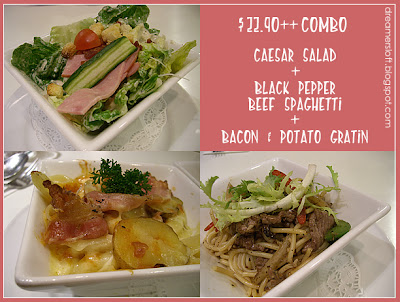 Hubby had caesar salad, black pepper beef spaghetti and bacon & potato gratin. I guess he was quite satisfied with the meal. But the portions seemed too small for him. On the other hand, I couldn't really finish mine.
In a nutshell, it was a satisfying meal, but nothing spectacular to rave about. Then again, I'm not a fan of pasta.

Posted by daydreamer at 11:49 PM No comments:

It's almost 2 years since I last did wakeboarding. Finally had a chance to wakeboard with hubby and 2 of his colleagues again. Yep, I'm in desperate need of some adrenalin rush here :D

We made our way to Launch 2002 Wakeboard School at Marina Country Club bright and early on my precious Sunday morning (would have been catching up on my beauty sleep if not for the lure of wakeboarding :p) 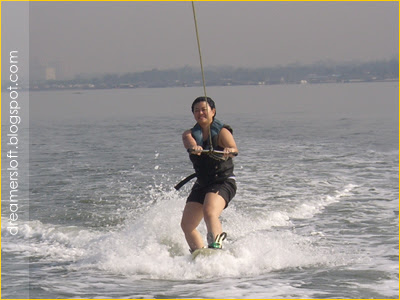 Was worried initially whether I could even get up on the board but like the instructor said, wakeboarding is like riding a bicycle. So imagine my elatedness when I managed to get up on my first attempt! Did a fair bit of riding and surfing behind the boat for subsequent trys. Yeah! It sure was great fun! 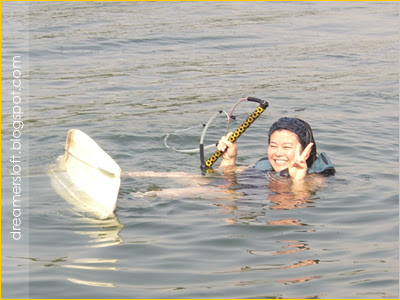 Oh well, the riding took its toll as the body had to counter the force of the boat and I had body aches for the next few days :( But no regrets and I'm game for more anytime!

Posted by daydreamer at 9:01 PM No comments:

Email ThisBlogThis!Share to TwitterShare to FacebookShare to Pinterest
Categories: Wakeboarding

Chill Out at Altivo Bar, The Jewel Box

August has been a stressful month in terms of work; full of mental blocks and frustrating situations.

Seeing how stressed out I was, hubby offered to bring me 'somewhere' to chill out after dinner. The 'somewhere' turned out to be The Jewel Box at Mount Faber. There are a few dining options at The Jewel Box. We opted for The Altivo which is an alfresco bar which offers a stunning view of the habour and Straits of Sentosa. A pity I didn't bring my camera, had to manage with my mediocre phone camera -_- 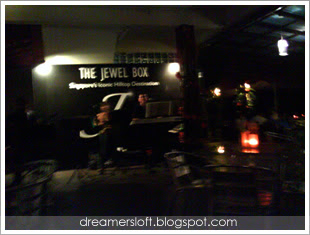 The ambience is cosy, with the usual bistro settings coupled with some comfy lounge sofas. Would expect to see more dating couples, but surprised to see some families as well. 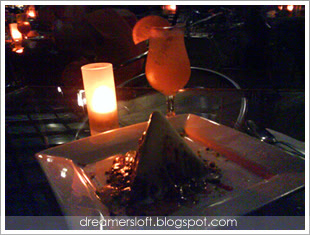 Still full from dinner, we just ordered dessert and drinks. The Jewel's Peak is an interesting pyramid-shaped vanilla ice-cream with brownie base and garnished with chopped nuts. Summer Breeze is a promotional mocktail, quite tangy and refreshing. Glanced at the menu and interesting to note that besides the usual International Cuisine, local favourites are offered too.

With a live band playing jazzy numbers and sentimental hits, this place is a perfect spot for chill out! Good music, spectacular night view, refreshing cool breeze, exactly what I need to calm myself and gain some sanity.

I must go back there one of these days to try the food. 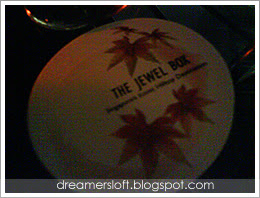 Posted by daydreamer at 10:59 PM No comments:

Having successful baked the Orange Chiffon Cake many times in the past few weeks, I decided it was time to attempt the Pandan Chiffon Cake.


However, the attempt was deemed a baking disaster :( The recipe (from Chef Christopher Tan's cookbook, Shiok!) calls for pandan leaves to be chopped finely to a grassy green using food processor or chopper, then squeezing the finely chopped leaves to get pandan juice.


I only have a juice extractor at home then, so I naively thought that it should work fine as well. I could even skip the step of squeezing the pandan juice using muslin cloth. Alas. That is not to be. All I can say is, I ended up with a grassy mess and not much juice extracted. My favourite table linen from Japan got stained with pandan juice accidentally and the green stain won't come off after washing -_- The packet coconut milk bought from the supermarket wasn't really fresh; and was too thick and strong.


My first Pandan Chiffon Cake turned out to be Coconut Chiffon Cake. Moreover, I wasn't exactly in a good mood when I was preparing and baking the cake. Heard from a saying somewhere that the ingredients will know it if the baker is not happy and hence the end product won't turn out well. Hmmm...
Despite the disappointing result, I decided to try again after a few days. And I bought myself a chopper and even bought fresh coconut from the wet market to get coconut milk. Really happy that my spanking new chopper is a breeze to work with and requires minimal effort to clean :D No problem to get fresh pandan juice this time round, but I confess it's still a rather messy and tedious process. Then again, I'm not going to switch to artificial pandan essence.


I'm proud to declare that my second attempt at Pandan Chiffon Cake was successful! 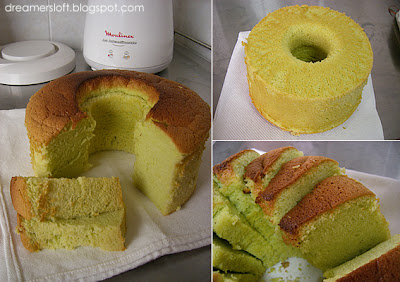 Hubby is the happiest because he much prefers Pandan Cake then Orange Cake.
Posted by daydreamer at 6:30 PM 2 comments: