I can't believe it, after watching so many K-dramas that made me laugh and cry so much (basically obsession mode each time a drama attracted me), I've not been to Korea yet -_- Well, it's on my must-visit country list for the past few years, but somehow didn't manage to materialise the plans?!! Next year, I promise myself.

Even though I've not been to Korea, have heard a lot about Korea street snacks such as Ddeokbokki (spicy rice cakes), Hotteok (sweet pancake), Odeng (fish cake), Boong-uh-ppang (Goldfish bread), Kimbap (rice rolls) and many more through the K-dramas, friends, YouTube, blogs etc. In fact, I've made hotteok two years back and love it!

Recently I watched a YouTube video about Gyeran Ppang and very intrigued by it. It's described as similar to muffin with a whole egg inside, and tasted both sweet and savoury. It's sold by street vendors all over Korea and apparently very popular during winter as people are attracted by the sweet aroma and steaming hot egg bread to warm the tummies. 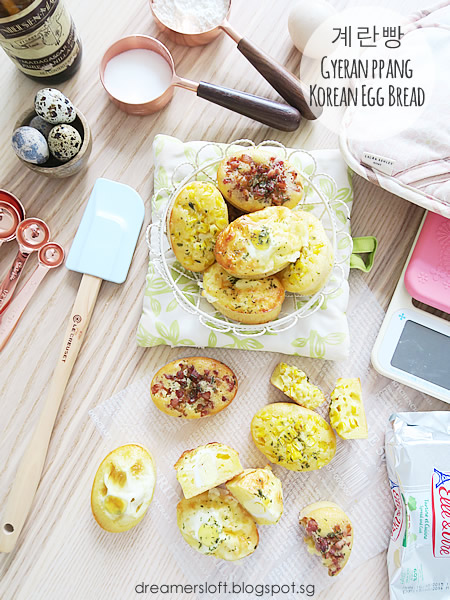 Coincidentally I was looking for some quick and easy breakfast/snack recipes which are wholesome and healthy, suitable for the kiddo. And when I researched on the internet and read through the ingredient list and method, I knew that I must give it a try!

I think traditionally, those egg bread sold by the street vendors consist mainly one full egg, but the Korean homebakers added more variations such as bacon and cheese. As I had some leftover ingredients in the fridge to be cleared like corn kernels, bacon and cheese, decided to follow suit with the additional ingredients. For some of the recipes and probably traditionally, the egg is inside the bread (instead of top), but I prefer to use the ingredients as toppings, looks more appetising and easier to identify :p 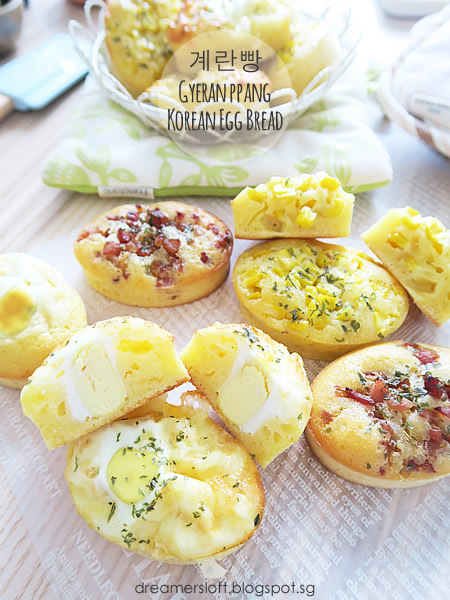 The first time I baked the egg bread, I used regular-size silicone muffin cups and mid-size eggs. But both hb and I felt that adding one whole regular-size egg seemed to be quite "jiak-lat" (overwhelming), making the egg bread very filling. After eating one, we couldn't possible try another flavour immediately. Instead of using regular eggs, I thought of quail egg because it would make the egg bread "smaller" (although cholesterol level is higher). But if I were to use the same muffin cups, the proportion of quail egg to batter would be imbalanced. Hmmmm....

After pondering for a day, I recalled I have a 9-hole silicone mold hidden somewhere in the darkest corner of my cabinet :p and the holes are oval shaped which is a little similar to the egg bread sold in Korea. Well not exactly the same but I guess it should work well for me! I used that mold to make financiers before and forgot all about it :p

And so with the smaller and shallower mold, the quail egg fits perfectly and the egg bread is now a more petite and manageable size for my family :) 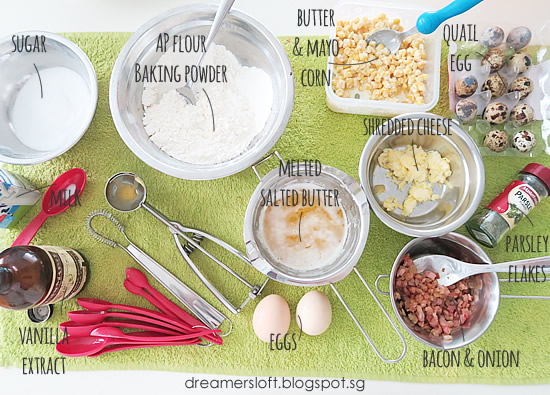 Ingredients are really simple. Sugar, all purpose flour, baking powder, milk, melted salted butter, eggs and vanilla extract. Toppings are up to individual. I made three variations, quail egg with cheese, bacon with onion and corn with butter and mayo. Added a sprinkle of parsley flakes too, since I have it. 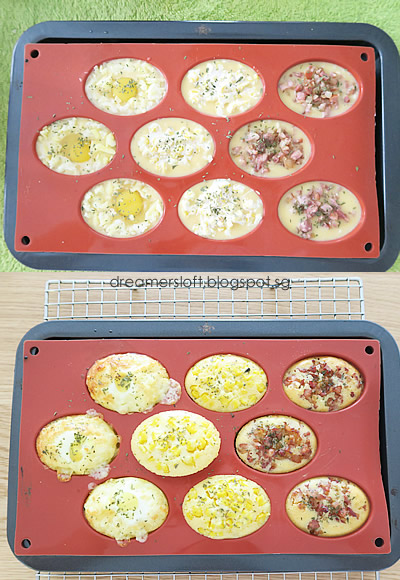 Before and after. The batter and toppings were filled to the brim of the molds but they won't overflow during baking. Good thing about using silicone molds, the egg bread could be lifted easily. 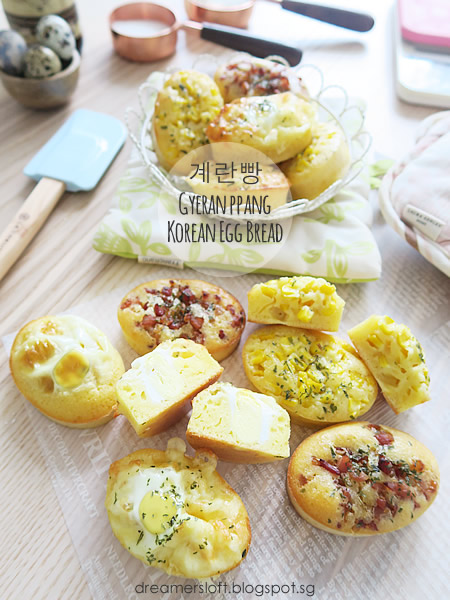 Ingredients
Toppings (optional)
Steps
*The egg bread doesn't taste as good after cool down or stored in fridge. To re-heat, steam for 5-6 mins. 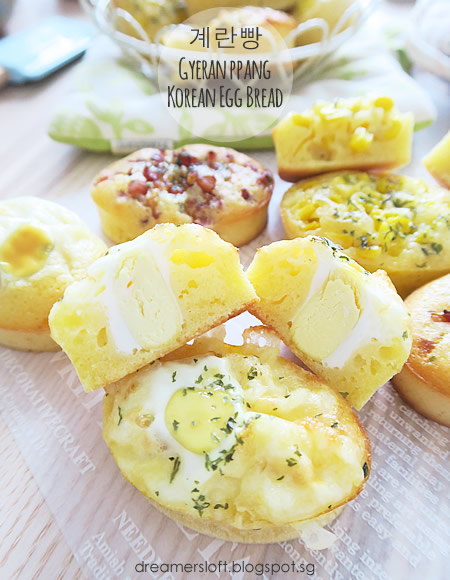 I totally love the corn topping one, the sweet juicy bits of corn kernels burst into the mouth with each bite of the bread. The bacon and onion is not bad as well, some may not like it due to the smoky saltiness in contrast to the sweetness but I like the combination. I also love the egg bread now, the quail egg is just the right size and the added cheese enhanced the overall taste (once again a sweet and savoury combi which I like). Best part, I can eat all three flavours at one go :d

The kiddo loves the egg one so much, he ate two immediately after dinner!

This recipe is certainly a keeper. Toppings (if desired) can be prepared in advance and the batter and baking itself can be ready in less than 30 mins. I think it makes a great breakfast or snack for kids since it's quite wholesome. Will explore more variations next time :)
Posted by daydreamer at 8:58 AM No comments: