It has been raining almost daily since last week; a sign of the monsoon season. When the weather turns chilly like that, I usually crave for a comforting bowl of hot soup or stew and take it as a full meal. One of my favourite soup/stew is the "Tokyo Chicken Stew" from The Soup Spoon. In fact, that's the only item that I order when I go to The Soup Spoon. But is it just me, I find eating this soup with bread (that's given) quite weird.

Since I like it so much, I thought of cooking it at home. The main ingredients for the soup can be found on The Soup Spoon's website. Besides chicken stock, chicken and the assorted vegetables, mirin and sake are used in the seasonings (besides the usual soya sauce, salt, ginger, garlic, sugar). Not sure why it's called Tokyo Chicken Stew, Oriental Chicken Stew might be more apt? Probably coz of mirin and sake used. 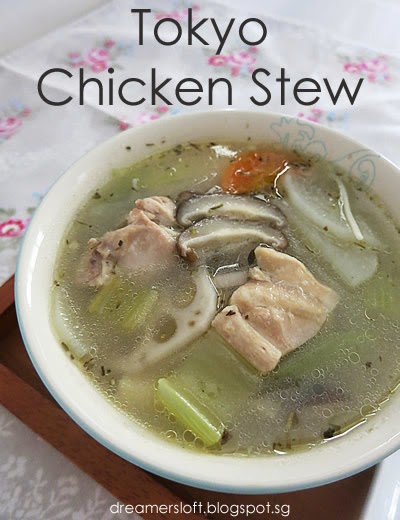 I think the key to a good bowl of soup would be the chicken stock so I started off preparing the stock from scratch rather than buying ready-made/canned ones or stock cubes. To prepare chicken stock, I usually get chicken feet and carcass from the wet market (and bones from the deboned chicken leg) and throw in any leftover vegetables I have in the fridge like radish, celery, carrot, onion, cabbage etc and if you like additional sweetness, soya bean.

One thing I didn't like about the Tokyo Chicken Stew from The Soup Spoon is the chicken, which is over-cooked and bland. I prefer the chewy type of texture. Well, don't think they can help it coz their soup is constantly heated and the texture of chicken will turn mushy over-time. So to overcome this problem, I used kampung chicken leg and cook the root vegetables which take a longer time first. Once those are ready, I then added the chicken (marinated) and boil till just cooked. 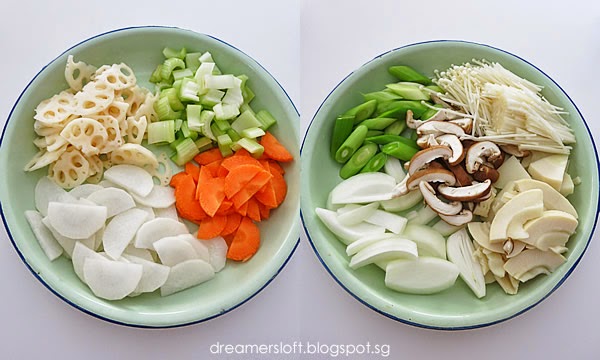 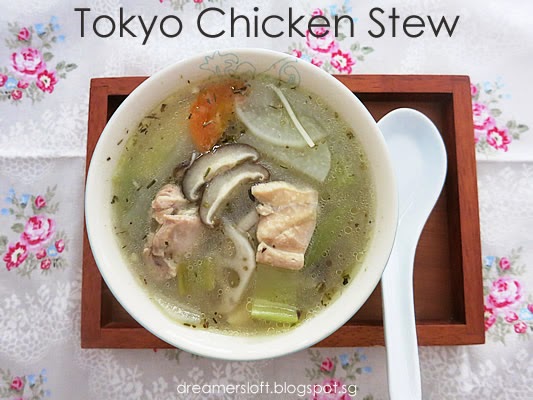 I must say this is quite a hearty soup, comforting and warming to the body. One bowl of it is already very filling and I could eat this two meals in a row!
Posted by daydreamer at 8:31 PM