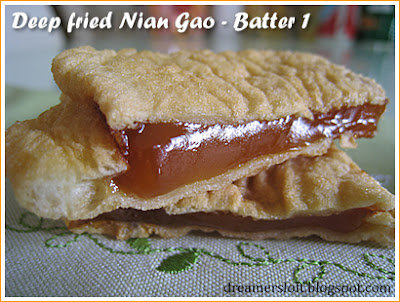 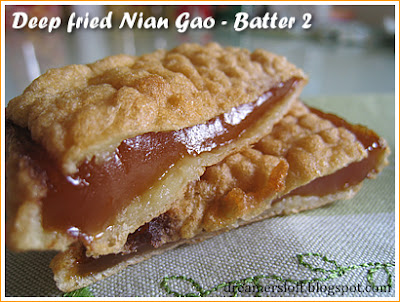 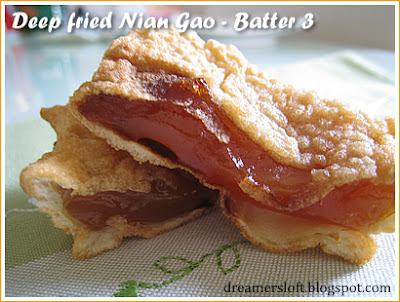 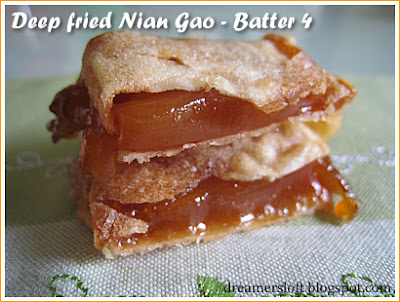 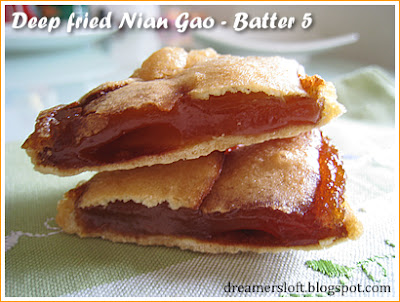 But I just can't seem to replicate the same nostalgic deep fried nian gao taste that I remember fondly as a child. Could be the ingredients or the amount of ingredient used. Anyway, I'm happy for now.
Posted by daydreamer at 10:09 PM 9 comments:

Meme - 5 facts about myself

I've been tagged by Mimosa's Diary for a meme! Although I have seen memes in other blogs, I have never been tagged before so was pleasantly surprised :) The thing is, I also don't know other bloggers and rarely leave any comments at other blogs. This would be an opportunity for me to get to know more bloggers. Just hope that the bloggers being tagged won't mind.
The Meme rules:
1. Link to your tagger and post these rules.
2. Share 5 facts about yourself.
3. Tag 5 people at the end of your post and list their names (linking to them).
4. Let them know they've been tagged by leaving a comment at their blogs.

Five facts about myself:
1. I always enjoy cooking but never gotten down to baking until March 2007 where I attended Joycelyn’s Cupcake Workshop at Shermay’s Cooking School. Since then, been attending classes regularly. I guess this new found interest is a way of de-stress as I discover that baking is rather therapeutic.

2. I am quite a procrastinator, especially when it comes to things I have to do but don’t enjoy. Maybe I am just plain lazy :p

3. My choices of therapy include shopping, sleeping, eating, going to spa, baking, going on vacation/getaways, mahjong… secretly I aspire to be a tai tai :p

Pineapple Tarts for the Festive Season

Happy Chinese New Year! 新年快乐!
I am so missing in blogging action. Besides overwhelmed with work and barely enough time for rest, I still insisted on baking my CNY goodies. The past 1 - 2 weeks, pre CNY to now had been a whirlwind of non-stop action. Working, baking, visiting, hosting, gambling... kind of suffering from fatigue now.
I must say that I am rather pleased with my baking results, especially Pineapple Tarts. Yes it is really common; shops everywhere are selling it in all shapes and sizes; homebakers are also joining the bandwagon and touting the "Homemade" brand. Still, it's the effort and labour of love that count, doesn't it? 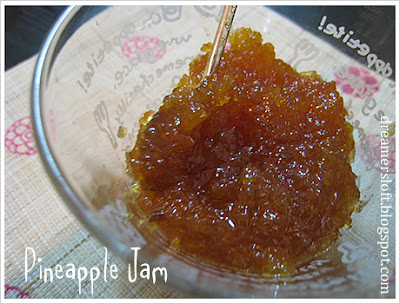 My pineapple jam improves a little from my test bake. Didn't blend the pineapple too much so that texture remains; cooked it longer as well so that it is drier. Had added even less sugar but somehow the jam still turned out tad too sweet. But overall, not too bad at all! 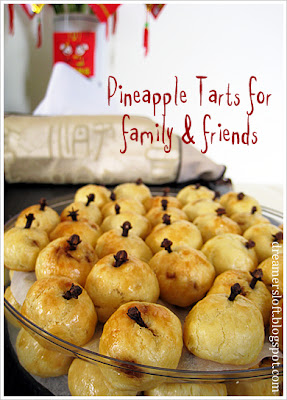 After 2.5hrs of cooking the pineapple jam, 2hrs of preparing the dough (ingredients + chilling time) and 2 nights of wrapping and baking the tarts (lost count of hours), I proudly produced 200 pieces of Pineapple Tarts. Am I considered slow? 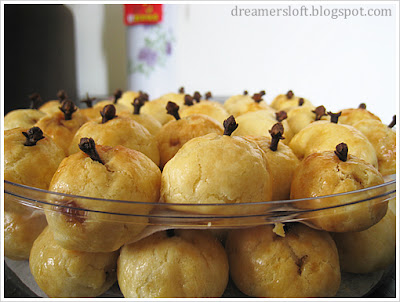 Anyway besides pineapple tarts, I also baked 2 loaves of Hazelnut & Cinnamon Biscotti, 24 pieces of Mandarin Friands, a few dozens Almond Shortbread and even Pandan Chiffon Cake (tough work considering I had to literally squeeze juice out of 60 pandan leaves after fine chopping them!). Come to think of it, all these didn't seem a lot now? Well, initially I even had plans to attempt Jasmine Infused Macarons since there were 4 days of holiday. But then, gambling visiting took precedence subsequently. 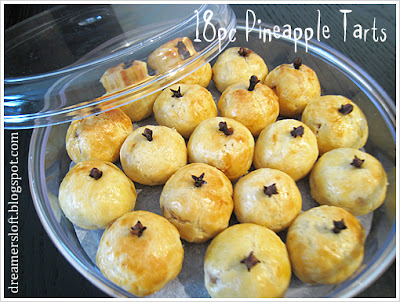 Hadn't intend to sell any of my bake goods this year since I'm really an amateur. Turned out one of my colleagues liked my pineapple tarts and ordered 2 boxes of 18 pieces. I guess no harm selling and just charged a small fee for them. 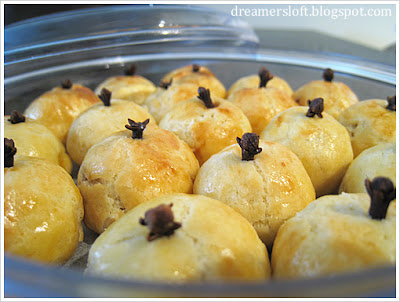 Anyway, turned out my baked goods were quite well received and already friends were interested in ordering the tarts for next year! Oooh... seems feasible...
Meanwhile, let me take a breather and enjoy the rest of CNY gambling resting and no baking.
Huat Ah!
Posted by daydreamer at 11:31 PM 3 comments: