The other day, I gave dear son some chiffon cheese cupcake bought from Four Leaves Bakery as a snack for afternoon tea. The cake was very soft, fluffy, light and not too sweet, he took to it quite well. Then, I bought the Japanese light cheese cake and steamed cake from Breadtalk, but he didn't like it. Well, if I were to compare these three cakes myself, I too would prefer the one from Four Leaves. My son has similar tastebuds as Mummy :p

Anyway, at this age, I should try to give him more homemade food rather than storebought stuff where there may be more preservatives, so decided to bake something for him. Previously had given him tofu and yogurt cheesecake as well as mango cheesecake, the response was just lukewarm. Probably a tad heavy for his tastebuds.

After flipping through Chef Keiko Ishida's Okashi recipe book, decided to go for the Japanese Milky Madeleines as I have all the ingredients on hand. 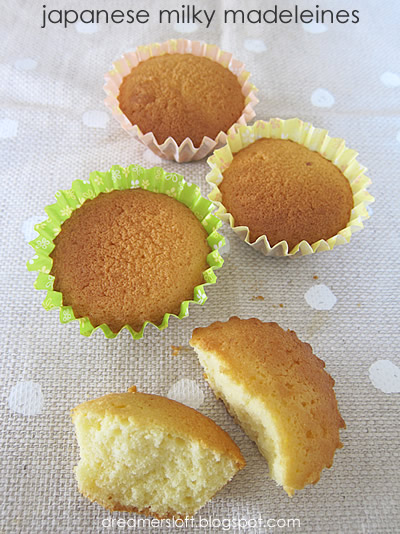 Ingredients (makes 18 cakes)
Method
Store madeleines in an airtight container at room temperature for up to 5 days, or up to 1 month in the freezer.

One note on step 4, on beating the mixture to light and fluffy. I'm not sure whether mine was considered fluffy or not coz I reduced the amount of sugar. The batter seemed fluffy, it looked glossy but just couldn't reach soft peak stage no matter how long I beat. After a while, I gave up and left it as it was. Not sure if this impacted the texture of the cake or not. 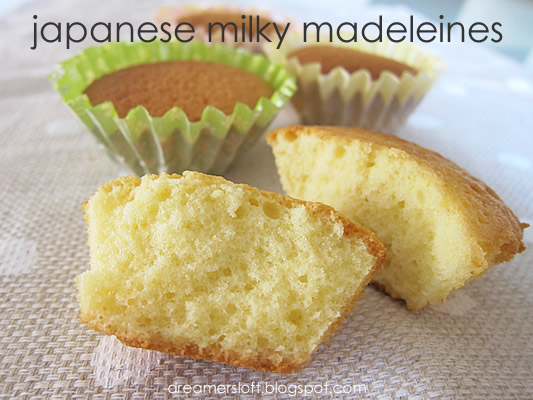 Anyway, I thought the cake texture turned out quite ok, just like a normal madeleine. But as with a madeleine, the cake was soft and tender when served warm and after it was cold, it turned a little hard and dry. Which reminds me, I don't really like madeleines in the first place because of this reason. I thought Chef Keiko's recipe would turn out different or was it due to the reduced sugar?

Oh well... dear son's taste test was more important. Okay, verdict, he didn't like it either. I believe the same reason as mine, a little dry. I think he likes fluffy and moist cakes like Mummy. Hmmm... I must search for a recipe that is similar to Four Leave's chiffon cheese cupcake! Anyone can give a pointer?
Posted by daydreamer at 9:49 PM 3 comments:

This was my first attempt on cooking sea cucumber, although I really like it a lot, especially the QQ/chewy texture. When we went Hong Kong last Nov, I bought some dried sea cucumber since it's sort of a "must" to buy sea delicacies there. Well, not a must but it's hard not to buy when there's a whole street shops full of sea delicacies beckoning us.

All these years I've never thought of cooking it, as I presumed it was difficult to cook it at home. Actually, cooking this ingredient itself is quite easy, it's the preparation (i.e. soaking the dried sea cucumber) that's difficult. Luckily, my mum volunteered to soak and prepare them for me =D 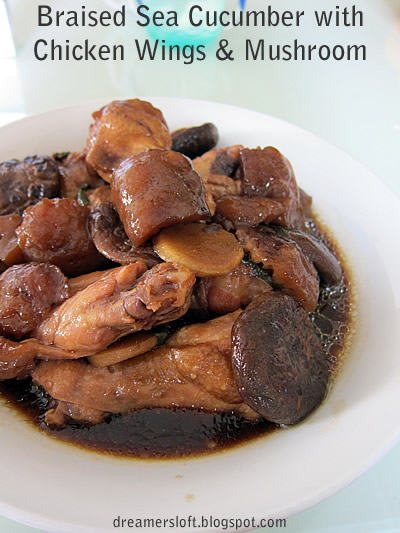 I decided on a Braised Sea Cucumber with Chicken Wings and Chinese Mushroom after browsing several blogs and recipes on magazines. Came up with my own version as the recipes I referred to were either not what I was looking for or too many steps involved. I want a hassle-free and easy method given my time constraint in tending to the cooking.

For a quick and easy method like this (without braising in claypot or adding more ingredients), I thought the result was not bad at all. The sauce was quite rich with the use of store-bought chicken stock and mushroom water, perfect to go with rice. The ingredients also soaked up the sauce well; especially the sea cucumber which was chewy and succulent.

I still have a few more pieces of the dried sea cucumber, not sure if I should explore other recipes or stick back to this one. But first, would need to soak and prepare first. I guess got to seek mum's help again since I'm lazy I no time to do so :p
Posted by daydreamer at 9:51 PM 2 comments:

This is a recipe from one of my favourite local TV variety show 三菜一汤 (Three Dish One Soup) Series 3. Basically celebrities (mostly from Singapore and sometimes from Taiwan) would have a cook-off of 3 dish and one soup with a budget of S$20. What I like about the show is, the dishes are mostly simple homecook fares which are quite achievable at home.

In one of the recent episodes, this particular dish caught my attention as it's rather creative yet easy to do. Usually the i-weekly magazine would feature recipes from the teams that won, but unfortunately, this was from the team who lost. So I just watched the show on xinmsn.com a few times to 'catch' the ingredients used and preparation method. As the amount of ingredients weren't very specific in the show, I sort of 'guesstimated' and was glad that the dish turned out quite yummy :) 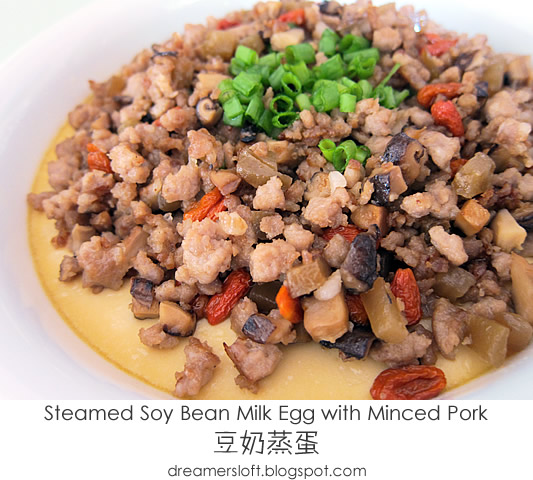 Steamed Soy Bean Milk Egg
* The recommended proportion of egg to milk is 1 egg to 100ml soy milk. Since I use smaller eggs, I cut down the soy milk accordingly. 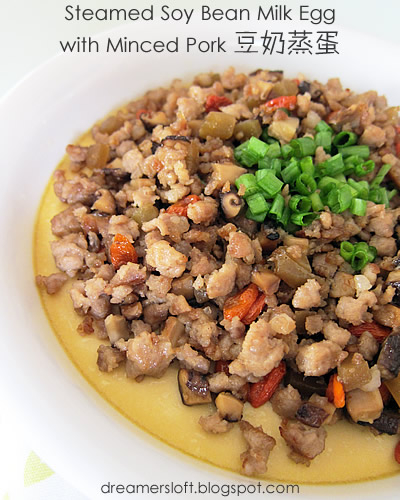 Minced Pork topping
*I happened to buy 230g of minced pork and decided to cook all. Due to the size of my steaming dish, there were some leftovers. Can either use less pork (adjust seasonings accordingly) or use a steaming dish that has wider circumference so that all the toppings can be used. 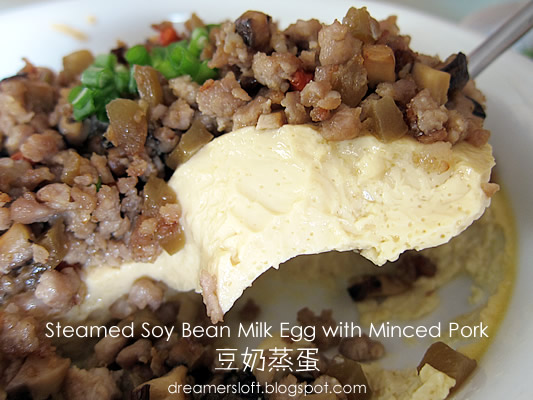 As for the minced pork topping, it really goes very well with the steamed egg! I love the different textures - tender chewy minced pork, crunchy pickled lettuce, fragrant mushroom and sweet wolfberries. This recipe is definitely a keeper for my family =D
Posted by daydreamer at 10:05 PM 1 comment: