Ever since I tried Shirley's homemade Ngoh Hiang at our Homebaker's gathering, I've been wanting to try the recipe (which she kindly posted in her blog); she had mentioned that the recipe was not complicated and quite manageable. I used to dislike Ngoh Hiang, especially those sold commercially as a lot of fatty meat was used, too oily and heavy on the palate for my liking. But hers was surprisingly light with a well-balanced blend of minced pork, prawn, crab meat and water chestnut, and tasted nice even when cold.

The peculiar thing is, traditionally Ngoh Hiang also known as "Five Spice Roll" has five spice powder added, but this recipe doesn't include the spice. Only salt and pepper are used. She admitted in her blog that sometimes she would add some five spice powder to give the name its authenticity :)

Next came my second dilemma, one of the ingredients is crab meat and I was contemplating whether to use imitation crab meat, or really buy a crab, steam it and extract the meat. Then it so happened that I attended a dinner with hubby where there was a whole steamed Alaskan King Crab (which typically cost around $400-500!). When there was leftover, I happily accepted the offer to "tabao" home =D Just perfect for the beancurd roll, in fact a very DECADENT one. I managed to extract around 130g of crab meat, which I reckon cost $40-50?

My two dilemmas were solved, YAH! 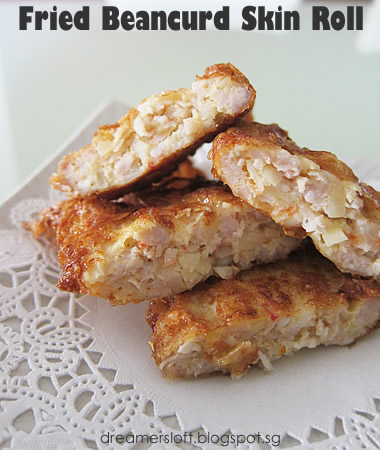 The whole process was quite simple just a little tedious as there are multiple steps to the recipe. I bought a sheet of beancurd skin from the wet market (cost 70 cents). It's a very large sheet which I cut into slightly bigger pieces (than what was stated in the recipe), about 12 cm by 13 or 14cm. I wanted to wrap them like those beancurd skin rolls sold at dim sum restaurants. The beancurd skins were very salty so I painstakingly wiped both sides of each piece.

For the pork, I didn't bother with the lean or pork belly, just bought about $3 worth of minced pork. For the prawns, I smashed each one with the back of the cleaver and roughly chopped them up instead of mincing them (as I wanted to retain the bite of the prawns).

There were around 32 pieces of skin, but I managed to wrap around 29 pieces only as I was over-zealous with the amount of filling in the beginning :p 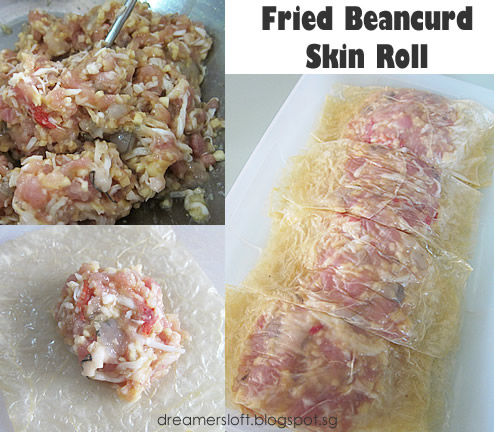 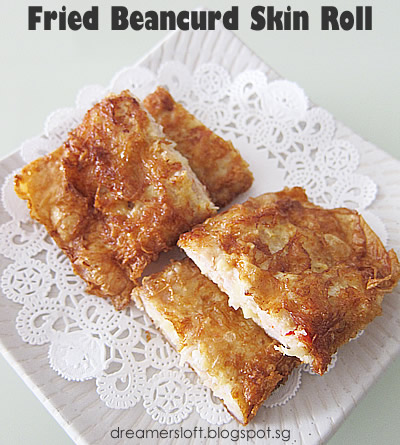 The beancurd skin rolls were very well-received by hubby and dear son. The skin was crispy and still slightly salty (thank goodness I wiped the skin first otherwise would be overly salty), and the filling was fresh, juicy and savoury, enhanced by the sweetness of the Alaskan King Crab :))) I guess I would make this once in a while only since I seldom do deep frying at home, moreover, it's not everyday that we get crabs (pun intended!).
Posted by daydreamer at 10:49 PM