I've always liked sweet stuff with a tinge of saltiness, as the saltiness brings about a different savoury dimension to the palate, like the Salted Chocolated Chip Cookies that I made before. Then I recalled seeing Salted Caramel Cupcakes somewhere, either from some bakery or someone's blog.
A search on the internet brings up a number of posts on Salted Caramel Cupcakes but most of them point back to the recipe by Sprinkles Bake. So I guess this must be the recipe worth trying.
At first I was quite daunted by the multiple components involved - the cupcake, the filling and the frosting but pushed on since I'm really curious as to how the cupcakes would taste like.
Here, I adapted Sprinkles Bake recipe by converting all the measurements from cups to grams for my own convenience and also reduced the amount of sugar used for all the components. The baking process was relatively manageable, albeit a little tedious. 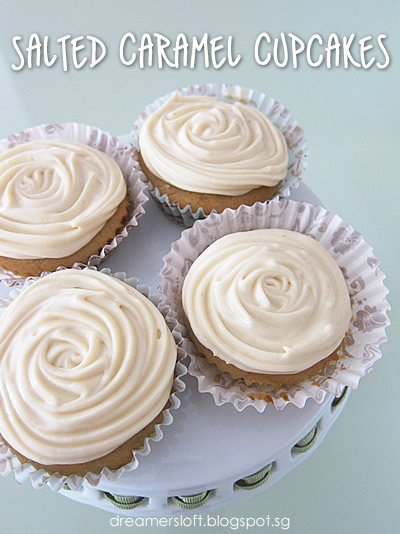 The result was not bad but definitely far from Sprinkles Bake!

The cake turned out a little flat to my annoyance as my muffin pan size was too big for the cupcake cases I used. As a result, the cupcake cases widened after filling with batter :(
I've since consulted friends/bloggers who bake often and they used either silicone cases or aluminium cases to hold the cupcake bases. I was so enlightened :) and realised what a dumb dumb I was.

Taste-wise, I love it! The cake was moist and tender, matchmade in heaven with the salted caramel filling and salted buttercream frosting :) The taste was what I had in mind, but probably the saltiness could be more pronounced. Next time, I shall increase the amount of salt and salted butter. 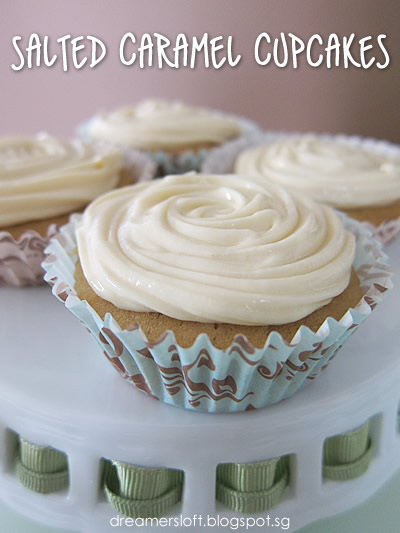 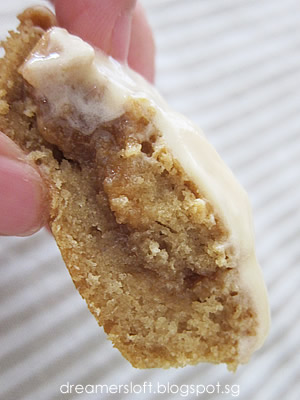 I brought the cupcakes to my office and there were pretty well-received as well :) Definitely gonna attempt this recipe again. The next time, I must make the cupcakes taller instead of being so flat, and increase the salt level for a more distinct contrast between sweet and savoury. Till then!
Posted by daydreamer at 11:11 PM