People who have been following my blog and FB know that I'm crazy over Japan :p. There are so many factors that attract me to Japan again and again, the zakka culture, the depachika (underground food hall), onsen and FOOD! The food culture is vast and colourful in Japan, and I always admire the Japanese for their persistence in incorporating quality ingredients in cooking, putting their heart and soul during the process and most importantly painstakingly presenting the food in a refine and artistic manner.

Personally I find it rather difficult to prepare a Japanese meal at home. Partly because the main ingredients I have in my pantry are catered towards local cooking. I do have some Japanese condiments and sauces but if I were to prepare Japanese dishes, usually they would be very quick and easy ones which I further localise and improvise. And partly because the Japanese (even the homemakers) are so refined and meticulous (in their preparation of ingredients, cooking process and presentation) that I find it hard to follow!  Yep, I admit that I'm very clumsy in the kitchen; I could never be a Japanese homemaker!

Anyway, when Alan of Travelling Foodies and Wendy of Table for 2. or More sent open invitations to join the Asian Food Fest Japan, I'm rather hesitant as I'm not confident of producing something worthy. When the Malaysia Food Fest was in the running for the past year, I hadn't join in as I was busy and unfamiliar with Malaysian cuisine *excuses*. Since I love Japan so much, I should try hor? So I mustered my courage and attempted my first official entry for AFF Japan - Omurice オムライス. 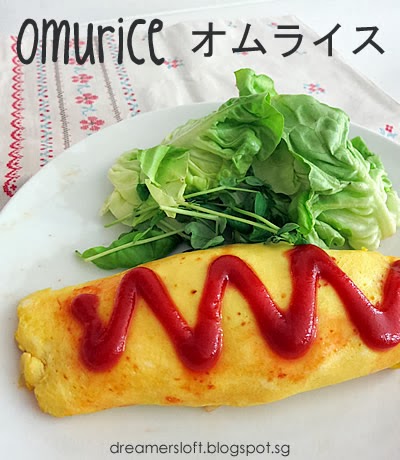 The Omurice オムライス is a classic example of contemporary Japanese cuisine Yōshoku 洋食 which is influenced by Western cuisine. It is a popular dish that can be found at many family restaurants in Japan; and it's also supposedly an easy dish that Japanese homemakers would cook for their kids. This dish typically consists of chicken rice pan-fried with ketchup and wrapped in a thin sheet of omelette, then served with ketchup or demi-glace sauce.

I love love love ketchup so decided to challenge myself to make this dish at home! I got the recipe from youtube channel: Cooking with Dog, which specialises  in Japanese home-style cooking hosted by a cool poodle Francis (very cute channel!). The chef in the show made it look so easy that I thought I can do it too!

Well, I was so wrong. This was my third attempt which looked slightly more presentable. Frying the rice was easy peasy actually. It was the omelette that killed me! During my first attempt, I think the heat was too strong when I poured the egg mixture into the frying pan, before I had time to "stir the egg mixture vigorously with a chopstick", the omelette was already cooked and hardened. LOL.

During the second attempt, I carefully controlled the heat of the pan and all seemed well until I placed the fried rice onto the omelette and tried to wrap the egg on top of the rice. I think there was too much rice so it was quite hard to wrap. Then as I flipped the omurice onto a plate, the egg broke and the fried rice dropped all over the place. Quite a disaster I must say! 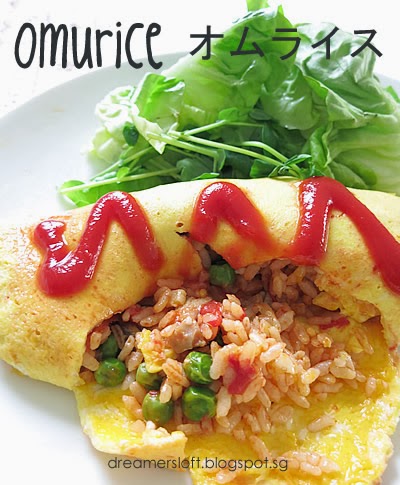 Taste-wise I must say the chicken rice was delicious, I love the taste of ketchup with the sticky texture of short-grain rice, and the ingredients chicken, mushroom, green peas really complemented the fried rice well. But I think this may be the last time I attempt this dish? LOL. Coz I couldn't seem to get the omelette right lah! 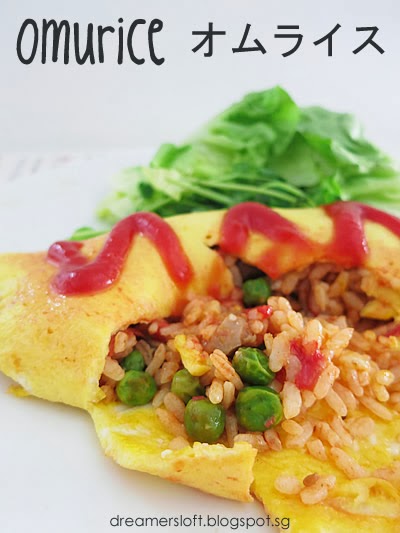 
There's another method of cooking the omelette such that the centre is semi-cooked and runny and when you slice the omelette, the egg just flows down beautifully. Here's an impressive video of omurice prepared by a Japanese chef in Kyoto. Don't think I can ever do this!


I am submitting this post to Asian Food Fest #1 Oct 2013 : Japan,
hosted by Alan from travelling-foodies
Posted by daydreamer at 3:06 PM