Today marks the end of AFF Korea Apr 2014. Despite that, I think I'm hooked to Korean cuisine and would continue cooking some of our family favourites from time to time and try new ones as well!

While hubby like Kimchi-Jjigae, I prefer Doenjang-Jjigae. I remember eating this spicy soybean paste stew at a popular Korean family restaurant in Singapore and liked it very much. The few times we dined there, I would always order this stew. But the very last time I went, the stew had a very strange odour/taste which musked the flavour of doenjang, I even asked the staff whether that was Doenjang Jjigae, and the staff insisted it was. Then I realised probably the broth or seafood used in the stew wasn't fresh resulting in a strong fishy taste in the soup. Naturally that was the last time I visited that restaurant. 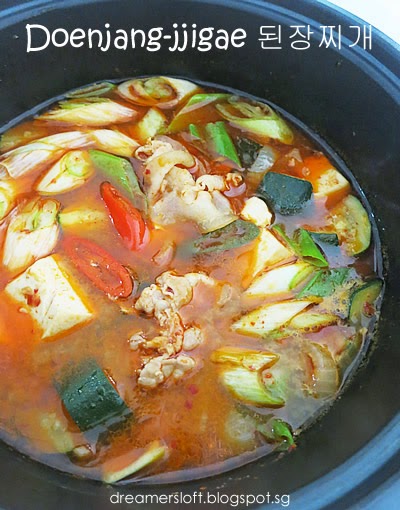 This month is a good opportunity to try cooking this soup at home, at least once. There are a few versions of the recipe but mostly similar. I decided to adapt the one by Korean Bapsang. Most recipes use Korean anchovy for broth/soup base, I didn't have any but didn't feel like using our local ones. Saw some fresh clams at the wet market and decided to use fresh clams for the broth/soup base.

Very pleased how the soup turned out. The fresh clam broth gave a sweet undertone to the soup and provided a complimentary role to the highlight of the stew, doenjang. All the ingredients, especially the thinly sliced pork belly matched the taste of the soup. Love it! This recipe is a keeper; I could cook it as a one-pot dish for the family (hubby and I only or non-spicy version so that dear son can eat too) by adding more ingredients like potato and mushroom or perhaps a smaller portion for myself as lunch. 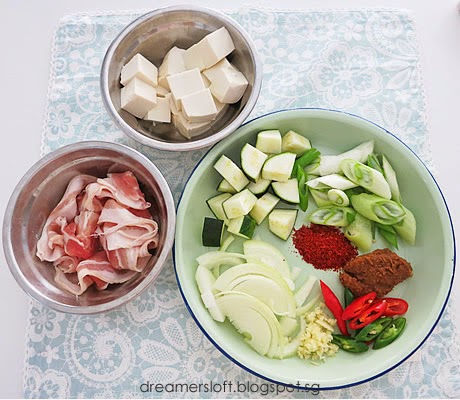 I am submitting this post to Asian Food Fest: Korea, hosted by Sharon of Feats of Feasts.
Posted by daydreamer at 4:44 PM