I had the opportunity to bake a birthday cake for a few of my long time good friends over the past weekend :)


What better time to try the Ultimate Fudge Cake layer cake learnt during the workshop. Instead of baking the chocolate fudge cake with chocolate fudge frosting which is too sweet and rich, I decided to go for the Lemon Surprise Chocolate Cake - a bonus recipe in the recipe pack provided by Chef Joycelyn.

Basically, it's an assembly of:
- Chocolate Lemon Cake (2 layers)
- Rich Lemon Curd Filling
- Lemon & White Chocolate Buttercream
* The recipe calls for Limoncello Syrup to brush between the cake layers, but I don't wish to have alcohol in the cake, so left it out. 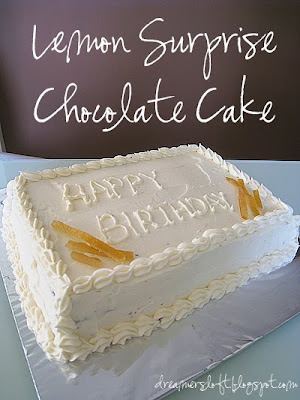 Followed the steps learnt in class closely and the whole baking process was relatively easy. Here comes the challenge - frosting.
The Lemon & White Chocolate Buttercream makes the cake look more elegant, yes? I think there's a slight improvement of the frosting as compared to the chocolate one did in class. But if you look closely, yes I still picked up some crumbs despite trying to spread the frosting as neatly as possible. In fact quite obvious since it's dark chocolate cake vs white chocolate buttercream. The surface of the cake was also not as even as it should be. 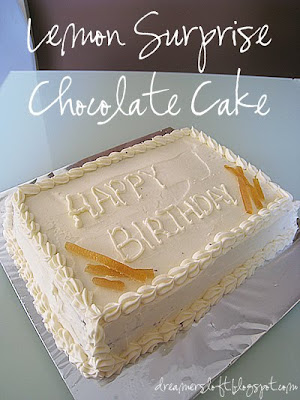 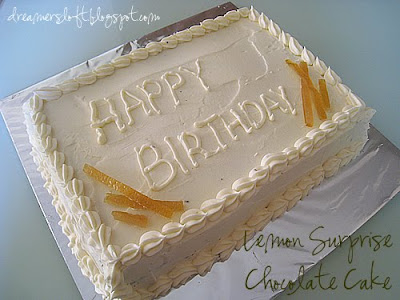 Decided to leave decoration simple as I ran out of patience for the frosting part :p 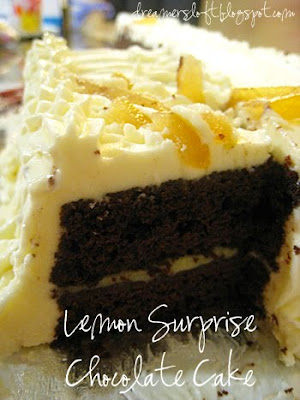 Feedback for the cake was not bad. The tangy lemon sort of balanced the sweetness of the chocolate cake. I guess this would make a good party/birthday cake, easy to bake just that frosting needs more practising.
Anyone needs a birthday/party cake? Variations - chocolate orange cake, chocolate rasberry cake, chocolate coffee...
Posted by daydreamer at 8:35 PM 2 comments: Links to this post

The most recent class I attended was Bread & Baked Goodies for the Home Baker IV by Chef Daniel Tay at Shermay's Cooking School. This could possibly be my last class till next year as it may be tougher to sit through a few hours of class subsequently, well maybe.

There are a Bread for the Home Baker III class but I missed it due to some reasons, couldn't remember. Anyways, was attracted to this class particularly for the Pecan Cinnamon Bun. I LOVE Cinnamon Bun! But I know it's a very complicated recipe to attempt after browsing several online recipes. Still, quite keen to learn Chef Daniel's version.

He's really humorous, kept saying that Pecan Cinnamon Bun recipe is extremely tough and asked the class who requested for it, make his job so difficult. Well, most of us just blushed and no one dared own up :p

5 recipes were demo-ed in this class, which is actually a lot to cover within 3.5hr. So some of the ingredients were prepared in advance and at some point, 2 demos took place at the same time where both Chef Daniel and his assistant demo-ed different recipes/techniques, keeping us very busy shifting attention from one chef to another. Talk about multi-tasking! 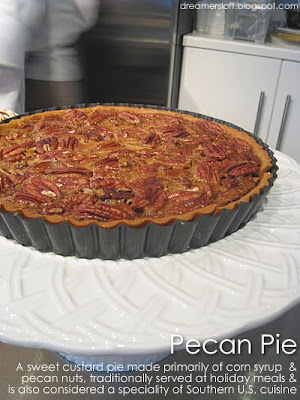 Seldom eat pecan pie as I'm not familiar with American cuisine. But this pie tastes good with sweetness of maple syrup and nutty crunch of pecan nuts. 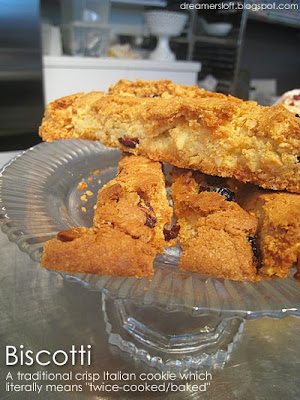 This is the chunky type of biscotti, unlike the wafer-thin ones taught by Chef Joycelyn. Good for dunking into coffee and tea. 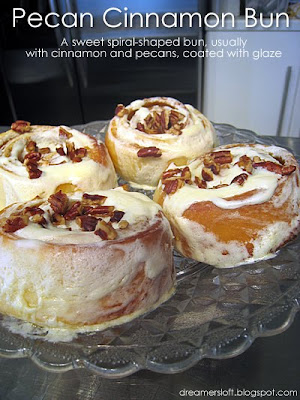 The 'star' of this class. I remember there used to be a craze of cinnamon buns a few years back but can hardly find any shops selling this nowadays. Provence at Holland Village sells it (without pecan toppings) so I'll go there for a quick fix whenever there is a craving.
Beware though, you'll be shocked to find out the amount of fat (butter, sugar, cream cheese) that goes into this bun. That's why it tastes so good :p Haha. 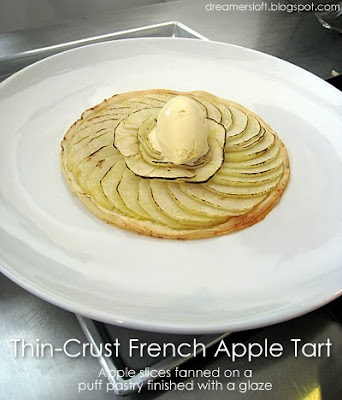 This is a relatively easy recipe using store-bought puff pastry as base, topped with apple slices and sandwiched between almond cream. 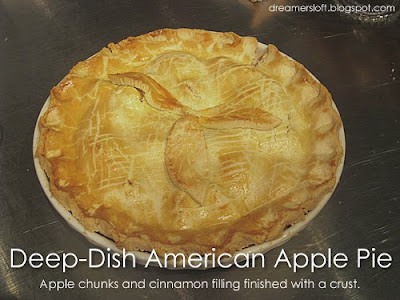 An American version of apple pie. Apple chunks are first cooked and then encased in a tart dough for baking. 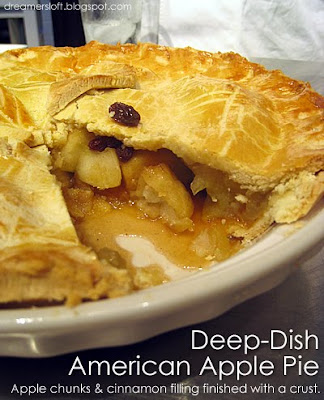 Tart dough is really quite tough to handle in our humid weather. Have experienced it myself when I attempted an apple tart recipe previously.

Would really be keen to attempt the Pecan Cinnamon Bun but rather hesitant due to the tedious steps and the fact that it is laden with calories.

P.S. Phew, finally posted the entries on overdue classes... and actually there are still a lot of overdue entries. Will take it slowly... jaa matane!

Posted by daydreamer at 9:01 PM No comments: Links to this post

This is yet another overdue post, the Ultimate Fudge Cake Workshop by Chef Joycelyn at Shermay's Cooking School. Had meant to attend this workshop in April, but was held up. So postponed the attendance till August recently.

So far, most of the classes I attended were demo classes, with very few hands-on. And most recipes are based on individual or small portions rather than a whole cake. It would be nice if I could bake a whole layer cake for birthday celebrations and such. Therefore when I learnt about this hands-on workshop, I jumped at the opportunity. And knowing Chef Joycelyn's impeccable and meticulous style, the recipe and preparation method would almost be foolproof (less the frosting part which depends very much on individual skills :p)

Basically the workshop is systematically divided into 4 parts.
Part 1 - demo of master recipe of the Ultimate Chocolate Fudge Cake. This is an extremely easy recipe, guaranteed ultra moist and tender cake.
Part 2 - Participants proceed to work station to prepare the cake from scratch. Each participant got to bake, frost and bring home our own creations.
Part 3 - After sending off the cakes to bake, demo of the Creamy Chocolate Fudge Frosting. This is a Deep, Dark & Decadent Chocolate Fudge Frosting which can be a little sweet and rich for some people's liking. Advantage is the consistency allows the frosting to stay in room temperature relatively long period. Good for outdoor parties.
Demo of how to layer the cake and finish decor with the frosting.
Different techniques demo-ed to create variations of decor and finishing touches to the cake.
Bonus recipes were also given in the recipe pack for us to vary the flavours of both the cake as well as the frosting.
Part 4 - On to the work station to prepare the frosting and start our own decoration.

Only took a few photos as we were kept busy with the preparation. 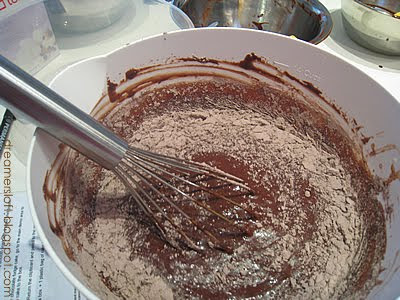 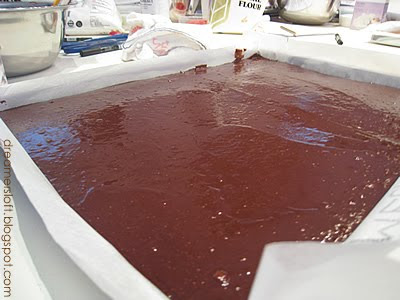 Cake batter ready for some heat! 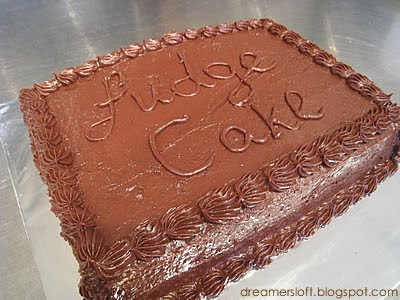 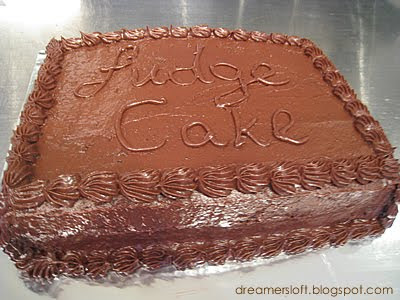 My completed Ultimate Choc Fudge Cake. I know. Hideous looking. I need more practice on piping skills.
Overall, it was a fun experience, although the work station is a little cramp due to limited space. Kudos to Shermay's team for preparing all the logistics to ensure everyone has his/her own set of equipment and adequate share of ingredients. Definitely not easy to run such a hands-on workshop as the whole place got really messy and dirty.
As for the cake, I'm sure I will have to opportunity to bake it for someone's birthday or for some gatherings :)
Posted by daydreamer at 7:54 PM 3 comments: Links to this post

Bread for the Home Baker II

This is a long overdue post! Attended the Bread for the Home Baker II class at Shermay's Cooking School in June and should have posted the details soon after the class but... so kind of embarassed to declare that I forgot most of the details :p

4 recipes were demonstrated during the class: 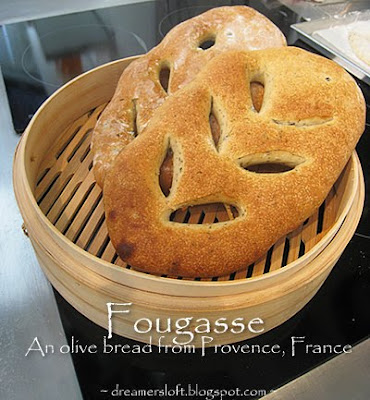 The Fougasse is chewy and flavourful. I think it would be nice with some extra virgin olive oil and balsamic vinegar. 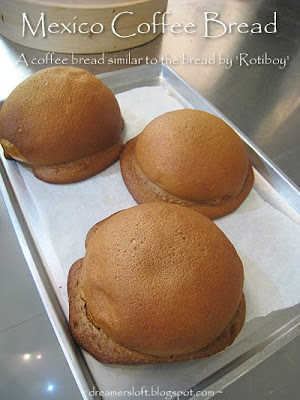 I'm rather fond of this bread made famous by Rotiboy. Although I don't drink coffee and seldom take coffee products, the coffee aroma is rich and complemented the fluffy bread very well. Now I know coffee cream is actually piped on top of the dough before baking to create this dome effect. Added secret, stuff a slice of butter and some sugar into the base of the dough before baking. 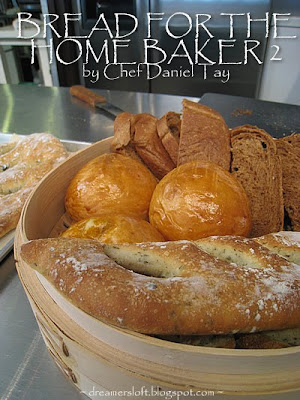 The traditional basic bun is like a template, once mastered, you could add different sorts of filling to liking to create buns sold at confectionery like curry bun, kaya bun.

Whole Wheat Raisin Bread is healthy and surprisely soft and fluffy despite the whole wheat.

Chef Daniel also shared with us about his experience working at his father's confectionery. And he always jokingly tell us it's cheaper to buy bread than bake it at home since it takes so much effort. Well, he's quite right.
At the end of the class, all participants brought back a goodie bag of the breads he demo-ed.
Quite keen to bake the Mexican Coffee Bread... will KIV!
Posted by daydreamer at 9:00 PM No comments: Links to this post