Hubby and I are chinese soup lovers, especially double-stewed soup 老火汤 or double-boiled soup 炖汤. I guess coz he's a Cantonese and I'm influenced by him. The Cantonese believe that the appropriate use of different types of ingredients (such as chinese herbs, plants, roots, stems, leaves, fruits, fungi, flowers, beans and dried seafood) in cooking soups could aid in adjusting physical well-being for people and even provide medicinal properties. To us, soups are like comfort food both soothing and nutritious. I try to cook double-stewed or double-boiled soup at least 2 or 3 times a week.

The Cantonese are said to be masters in double-stewed/double-boiled soup and this is evident during our trip to Hong Kong over the weekend. We could see shops selling dried goods such as roots, plants, seafood everywhere. During our second night, we had dinner at a famous roast goose eatery near our hotel and we ordered their soup of the day (例汤) which was carrot and green radish soup. We were totally blown away by the depth of the soup, it was sweet 甘甜 and very soothing, unlike a lot of mediocre soups that are being served at eateries in Singapore which taste very flat. And this shop wasn't even a soup shop. The next day, we returned for dinner again, partly because of the roast goose (which was awesome by the way) and partly because of the soup. The soup of the day was lotus root soup and once again, it was so good. Rich, layered and sweet yet not overwhelming. Hubby told me that he wants to drink soups of this standard back home! Upon closer look at the soup, we found small pieces of pork bone as well as dried mussels. So far I've tried boiling soup with dried oysters but not mussels, probably this was what made the soup sweet? Anyways, I bought some dried mussels back to try, will update again on that.

I digress. Back to this soup Papaya White Fungus Soup 木瓜雪耳汤. 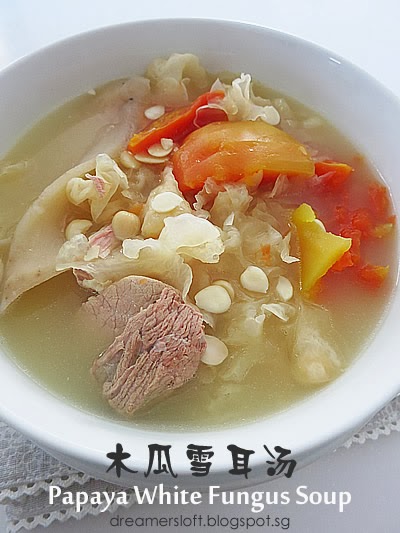 The recipe uses a type of chinese sweet almond called Long Wang Xing 龙王杏 which I didn't manage to find. Instead, I found Da Nan Xing 大南杏 which according to the shop owner, it is good for soups as well as making almond milk. 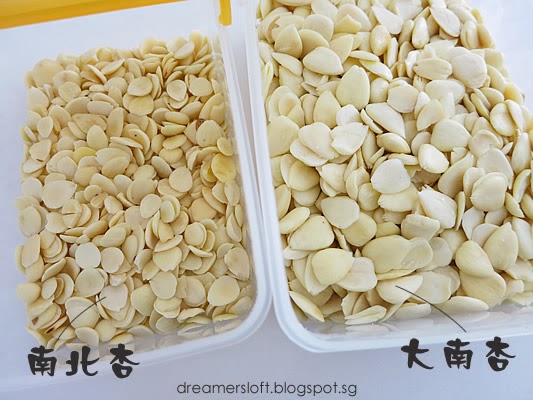 Posted by daydreamer at 9:24 PM