I always thought that the Hong Kong Style Pan-fried Radish Cake sold at Dim Sum Restaurants is very difficult to make at home. How is it possible to achieve the almost melt-in-the-mouth type of texture yet with a crispy skin?

In fact, I attempted a radish cake several years ago based on a verbal recipe given by my mother-in-law, but failed miserably. Back then, no matter how long I steamed the radish cake mixture, the batter just wouldn't cook and remained in its pathetic watery form! I gave up there and then.

Recently, after reading Shirley's post on her take on Radish Cake with Seafood and XO sauce, I realised the reason behind my failure! That's because I didn't 'pre-cook' the batter to thicken it up before steaming. Steaming the liquid batter directly over boiling water is more meant for restaurants where their stoves are able to generate high heat whereas our home stove's heat is simply not intensive enough to cook the rice cake batter through. It's the same theory as stir-fried veg or fried rice that we ate at restaurants; they taste nicer as the heat intensity could generate the 'wok-hei'.

With this realisation, I attempted the recipe from Shirley's post. It's really a concidence that I attempted so many of her recipes recently :) But seriously, I feel so inspired by her as she made the recipes look achievable. Thanks Shirley! 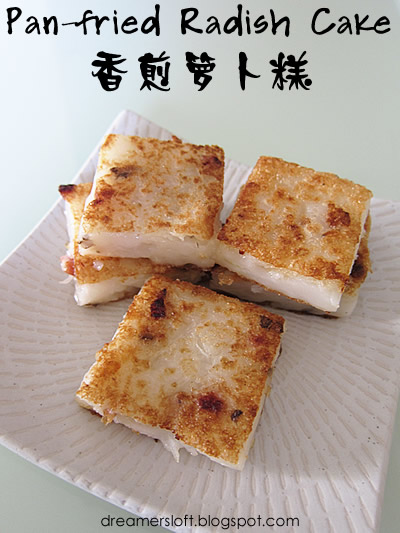 Here, I extracted the part on Radish Cake from her post for ease of reference. Please refer to her blog for method on frying the radish cake with seafood and XO sauce. I followed the entire recipe, except that I used a 18cm square pan instead of 21cm. I wanted thicker slices of radish cake like those in Dim Sum restaurants instead of stir-frying them into 'Cai Tao Kuay'. 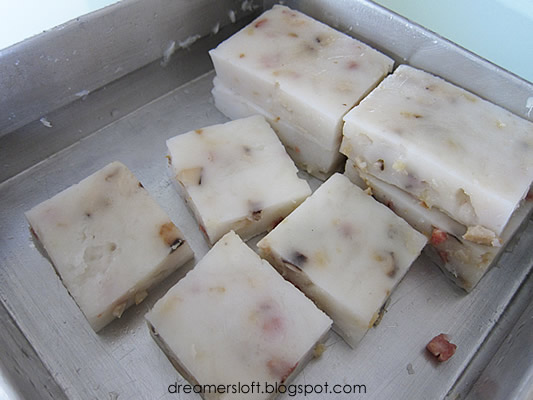 This is how the radish cake looked like after chilling in the fridge overnight. Initially I cut them into rectangles but changed my mind and cut them into squares for more dainty look. LOL :p They may be hard at this point but trust me, they really softened once heated. 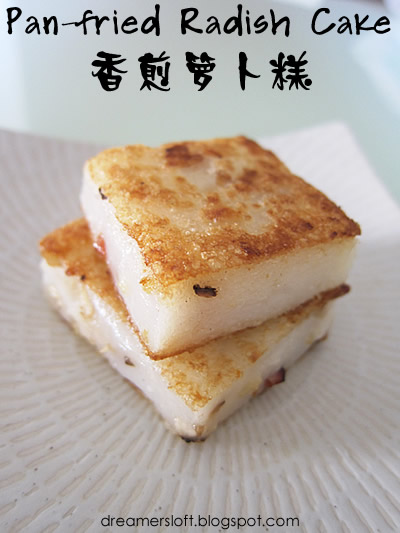 And TADAH, after pan-searing the radish cake, they looked almost like those sold at Dim Sum Restaurants! Yippee! And they were really crispy on the outside and almost melt-in-the-mouth inside. The radish cake was not too salty (those sold in restaurants could be a tad salty sometimes), and really fragrant with the bits of dried shrimps, mushroom and chinese sausage. Even hubby gave his thumbs-up :) Dear son was sceptical at first but savoured them after trying a small bite.

So I'm now convinced that homemade radish cake is really simple and quick, and I like it that the amount of seasoning (e.g. salt) could be adjusted according to preference. Now I'm tempted to try Shirley's version of frying it with seafood and XO sauce!
Posted by daydreamer at 10:06 AM