When I was deciding what to bake for dear son's birthday celebration this year, I came across a few youtube videos he was watching, about how to make Rainbow Cake. The Rainbow Cake looks amazing and I knew he'd be very happy if I were to bake one for him, so I went about searching for a suitable recipe.

The shortcut method would be buying those pre-mixed white cake from supermarkets but hey if I can bake, why use pre-mixes right?

There are many recipes available on the internet and I zoomed into 3 for comparisons. 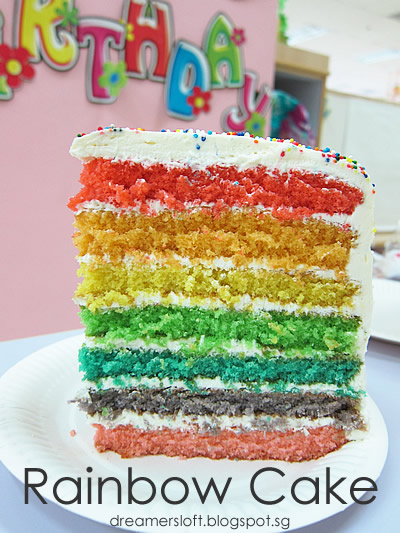 All 3 recipes are quite similar to each other. I took out option 3 as I was unfamiliar with the method used. Between options 1 and 2, I could have chosen 1 since the recipe was featured on Martha Stewart and tested by a fellow Singaporean too. But I was a little tentative because when I converted all the measurements to gram (using free online converters like traditionaloven.com), the figures for flour and sugar didn't tally with the blog (Whisk Kid had stated ingredients in both cups and grams).

Confession, I am totally uncomfortable with recipes that use cups, so I always convert measurements to gram first before proceeding.

In the end, I decided to attempt lululu at home's recipe. Like I said both recipes are very similar to each other, except maybe for the eggs part. Whisk Kid's recipe uses only egg whites, whereas lululu's whole eggs. I believe using egg whites only (pure white cake) helps to accentuate the colours of the rainbow. Yolks (cake has yellowish tinge) might affect the colours.

In addition, I decided to go for 9 inch and 7 layers. Looking at the picture on lululu's blog, I realised that 8 inch base will produce a very very tall cake which makes transportation more challenging. The thing is, 9 inch pan means I have to bake 4 times for 7 layers as my oven can only fit 2 pans at a time! Or how about just settling for 6 layers?Arghhhh! Then I remember dear son used to sing this nursery song "Red, Orange, Yellow, Green, Blue, Purple, Pink, it's a rainbow, it's a rainbow, beautiful rainbow in the sky". I thought it would be cute to relate to the rainbow song, and so, just do it lah! I started at about 10pm (after settling dear son to sleep and chores). The cake was very easy to make, just that it's very tedious coz I only have 2 baking pans. Meaning I had to grease, bake, cool, wash x 4 times!

As I completed each layer I felt a little unsettled as the layers were too thin for my liking and had brownish crust (temperature too high, over-baked?). They also felt hard and not tender at all (I had reduced the amount of sugar). By the 6th layer, it was already 1am but I simply didn't like how the layers turned out. I knew I had to re-start. So, I stacked the layers, cut a section to see how they turned out, and also tasted the cake. YUCK! They were awful, both taste and looks. I was right, so back to square one! 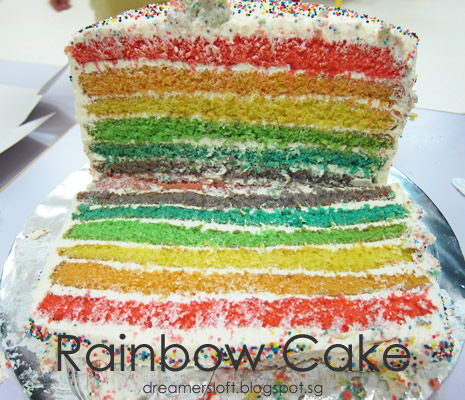 Luckily I had enough ingredients, except for fresh milk. Dear hubby was very sweet to go out and buy for me! While hubby was out, I took some time to re-calculate the measurements, turned out I miscalculated the amount of milk needed (difference between ml and g - yes I am very anal to get precise measurements). By the time I started again, it was 2am. I also decided to increase the proportion by 20% as the layers were too thin for my liking. Oven temperature was also lowered by a bit. I wanted to cut out the yolks this time so that the colours could be more vibrant, but I forgot! Anyways, by the time all 7 layers were completed and after I washed up, it was 5am! The layers turned out better looking and I just had to cross my fingers that they would be ok. Decided to catch a nap and continue the frosting after (luckily I took full day leave).

Woke up around 7am to prepare dear son for school. After sending off hubby and dear son, I did some chores and went out to buy more eggs for the buttercream frosting. By the time I started the buttercream frosting, it was 9+. So the process went, buttercream for each layer, crumb-coat, chill in fridge and finally frosting for the whole cake. Then I realised that the buttercream prepared was barely enough; should have increased by 20% too along with the cake. Oh well, the frosting didn't smooth enough but I was also too exhausted to bother. Luckily I bought some rainbow sprinkles to camouflage :p By the time I was done, it was like 12noon. So in total I spent 6hrs (not including the abandoned first attempt), this is the most tedious and time consuming cake ever. 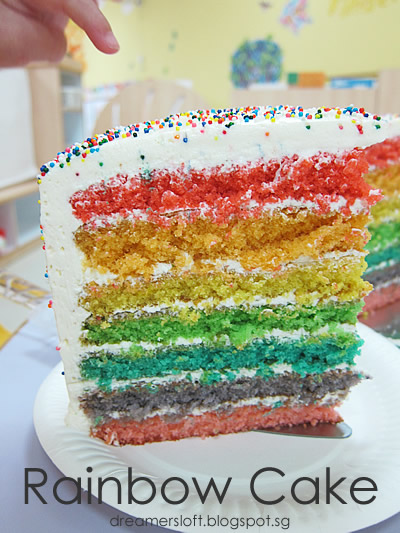 Dear son was very pleased with the cake, so were the kids at his childcare centre. Actually I think kids just love cake, whatever the design. See the finger in the picture above? That's his finger, he was really excited and kept pointing at the cake.

The texture of the cake was still not as tender as I liked, but tasted ok with the buttercream, not too sweet as well. I thought colours were a little dull and not as vibrant as what I've seen on the internet. It must be the yolks. The layers also had bits of brown crust, so probably got to look into the oven temperature and baking time. Hubby commented that vanilla buttercream was a little heavy on the palate. 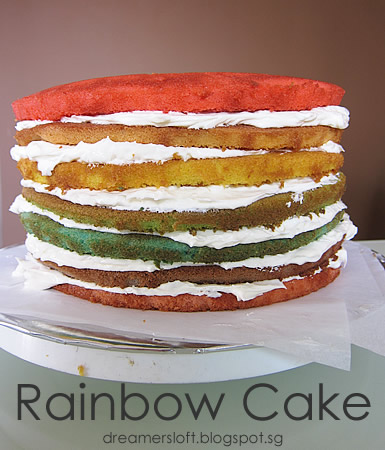 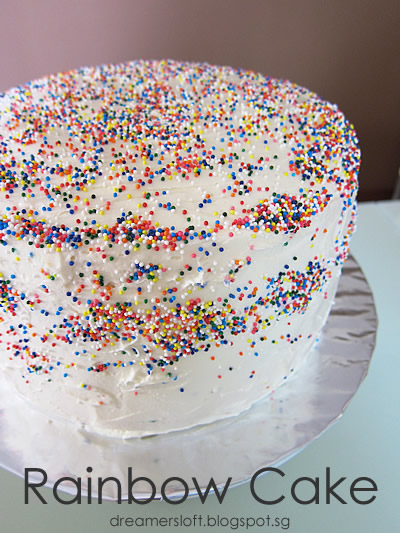 I would probably attempt the cake again, this time with Whisk Kid's recipe, just to see how it would turned out. This time, I used vanilla buttercream instead of lemon buttercream (in consideration of the kids), but I would love to use lemon buttercream next time so that the taste will not be so one-dimensional vanilla based.
I could even coconut-based cake or try substituting butter with oil for a lighter cake?

Meanwhile, I'm really exhausted and need to take a break from the intense baking!
Posted by daydreamer at 5:59 PM