Wow, I realised that I haven't been baking anything new for months, apart from my cake orders and the same old like Blueberry Yogurt Muffin (for the kiddo) or Gula Melaka Banana Walnut Cake (for the hb).

And I haven't eaten any cupcake with frosting for months too. Well, I'm on diet for the past few months (still am) so it's bake-no-evil, eat-no-evil :p

I'm proud to announce that I've achieved my first weight loss target, hoping to lose more, but probably at a more relaxed pace :p So decided to reward myself with a cupcake! Actually it's because I have some leftover ingredients I want to use up before going on a holiday :) #excusetobake 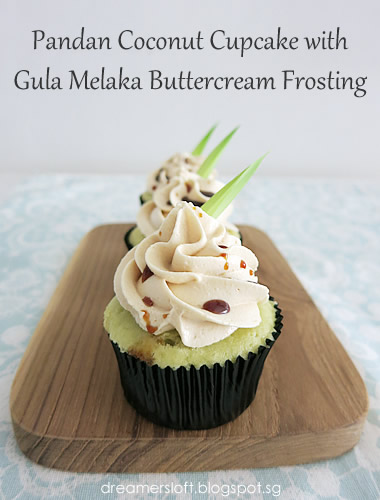 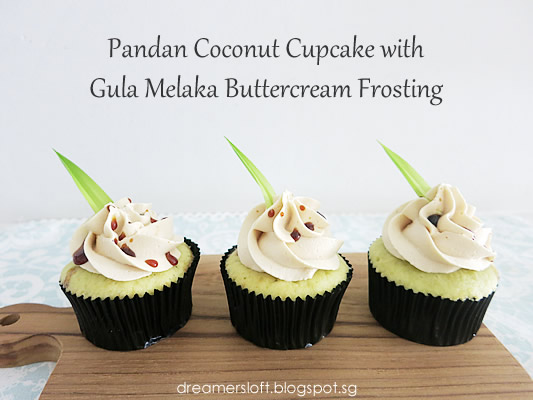 Initially I had doubts about making this particular cake and frosting because looking at the sugar content and method, I knew that this was going to be sweet, and the cake texture would be more dense type. Personally I prefer cakes that are light and tender and less sweet such as sponge cake, combined with chantilly cream or whipped cream. Or just a simple chiffon cake. 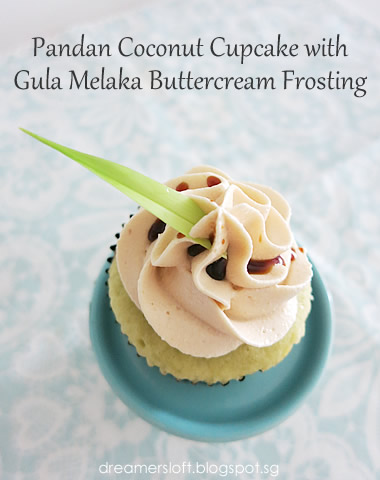 Finally decided to just do it! I could probably jog a longer distance or eat lesser for dinner to compensate :p
Made slight changes to the recipe like reducing amount of sugar for both cupcake and frosting. Also increased the amount of pandan juice and reduced the amount of coconut milk, hoping that the coconut milk flavour will not be too strong and pandan flavour will stand out more. 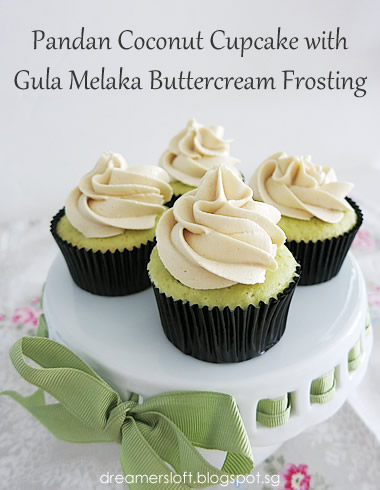 Initially I didn't drizzle any Gula Melaka syrup onto the buttercream frosting and the cupcakes looked kind of plain. Was about to wash the pot (with a bit of syrup left) when the idea came to my mind. Bingo! The cupcakes looked more interesting now. And then, suddenly another idea of decorating the cupcakes further with tiny pandan leaves. Wow, now my cupcakes look kinda of chic and atas-looking. LOL! 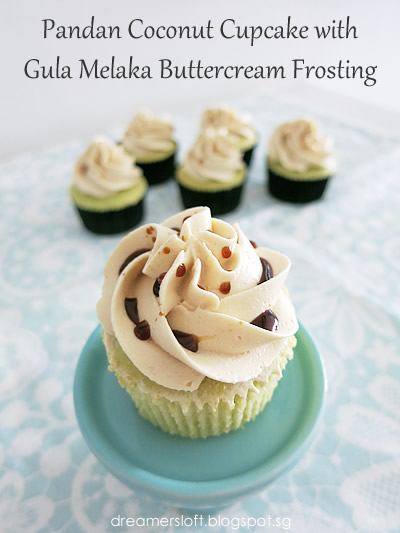 I didn't bother with any colouring to the cake as well, so the cake wasn't tinted green, but rather a tinge of pale green tone, something like avocado.

The cupcake turned out quite well, moist and dense, but not too heavy. The coconut fragrance is present, slightly overpowering that of the pandan. Still a tad sweet, luckily I reduced some sugar. The buttercream is surprisingly not too heavy with a tinge of Gula Melaka taste. The additional drizzled syrup accentuated the overall taste, glad that I decided to drizzle some onto the frosting. The combination of the pandan coconut cake and Gula Melaka buttercream is so much better than expected, I found myself having one bite after another and soon, one cupcake gone, leaving me craving for more. Had to stop myself from having another one. 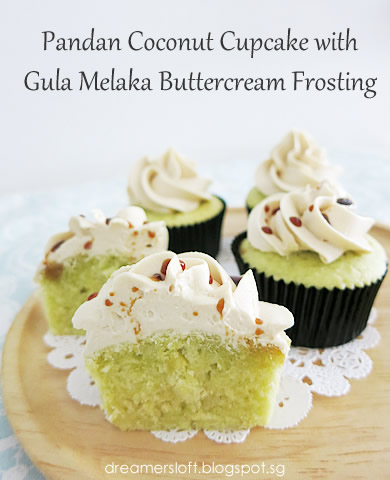 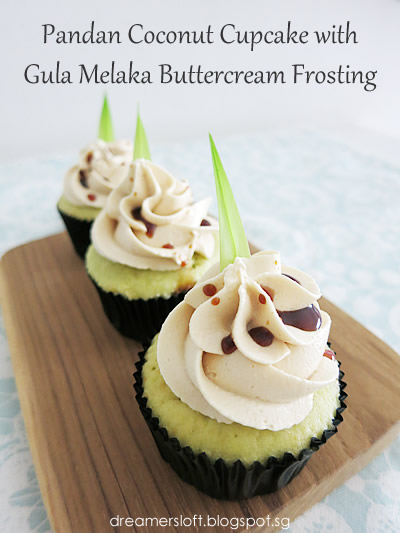 This recipe is definitely a keeper!

And if anyone is interested in ordering this cupcake, drop me a note at megtan@singnet.com.sg.
Posted by daydreamer at 12:33 PM