Recently, I received an order for a Rainbow Cake from a friend E, who is celebrating his son's upcoming birthday.

Was considering whether to use the previous recipe attempted for dear son's birthday or try the other recipe by Whisk Kid that I was interested in. As it was also the hubby's birthday recently, I took the opportunity to test-bake Whisk Kid's recipe.

I decided to go for 7" round cake as my friend's cake is supposed to be for 10 pax. I reckoned the cake would be too tall if it were 6". But since it's only a test-bake, I just did a 4-layer cake instead of actual 7-layer one. As such, I halved Whisk Kid's recipe. For the buttercream, I also used Whisk Kid's Lemony Swiss Meringue Buttercream, and adjusted the ratio accordingly, enough to crumb coat and frost the cake. 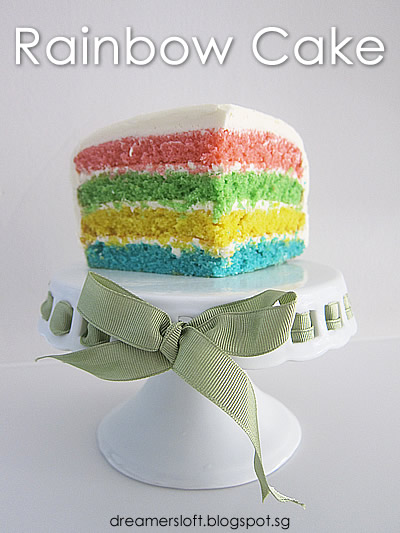 The cake turned out beautifully, and in fact the texture was slightly more tender than the previous recipe, which was curious because Whisk Kid's recipe uses lesser sugar and butter comparatively. Or could it be the eggs? Whisk Kid uses only egg whites and lululu uses full eggs? I have no idea. But the cake's texture is still not as tender as I like. Probably I would use cake flour for the actual cake.

As for the lemony buttercream, I thought that the lemon extract was too sharp for my liking. Hubby had the same though as well. But the lemon taste did provide a slightly refreshing change to the otherwise vanilla base cake. Probably I will add lemon juice instead of extract, or explore other lemon buttercream recipe. 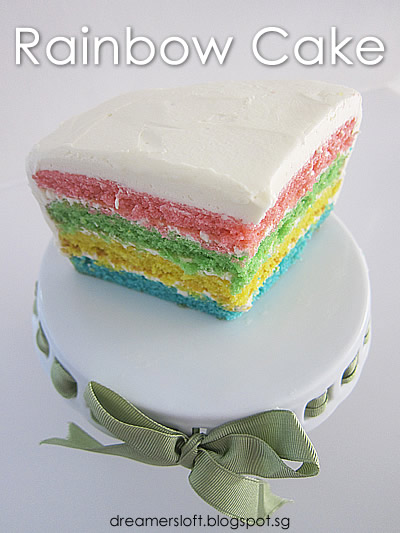 Posted by daydreamer at 6:34 PM