After test-baking four batches of petite Hanjuku Cheesecake two weeks ago and not entirely happy with the results, I finally took time to test-bake another two batches. And declare that I'm done with this cake. I mean, I'm done with testing it, this is the best I could do for now :p


Of the two batches I baked, these twelve (from one batch) were the successful ones and the other twelve failed to make it in terms of looks. 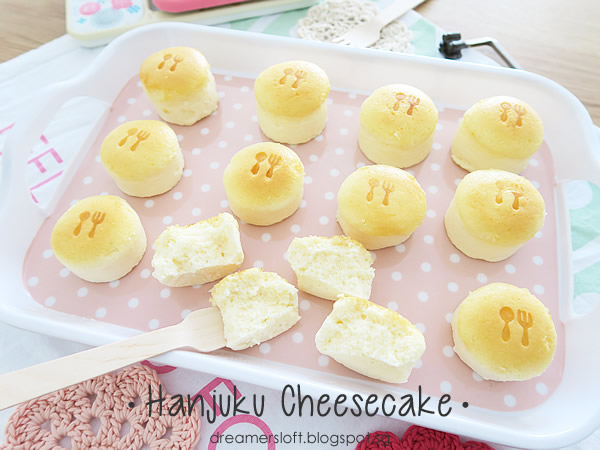 Basically I used the same recipe since I was happy with the taste and texture of the cake.

But in terms of method and bakeware used, I tried four different mechanisms or forms of control.

During one of my previous test-bakes (batch 1), I forgot to cover the pan (underside) with aluminum foil and some water sipped into the pan during baking. Coincidentally, that batch turned out to be the best.

So this time, I decided to divide the pan into two sections, six of the holes were uncovered whereas the other six were covered individually with aluminum foil. The reason why I did that was because during batch 2, I covered the entire pan with foil but the cheesecakes sunk in the middle portion (like hourglass) and I thought perhaps heat could not be conducted properly. 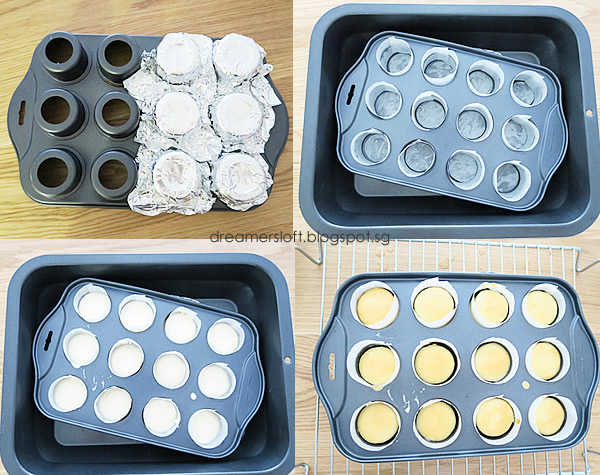 Some people asked me whether normal muffin pan works and hence I decided to give it a try.

I didn't have muffin/cupcake cases of the exact fit to the pan, so used whatever I have on-hand.
I'm not sure why the cheesecake didn't rise as much and top couldn't brown (despite everything the same), perhaps the pan was too shallow/too little water for steam-baking, or heat couldn't conduct well. 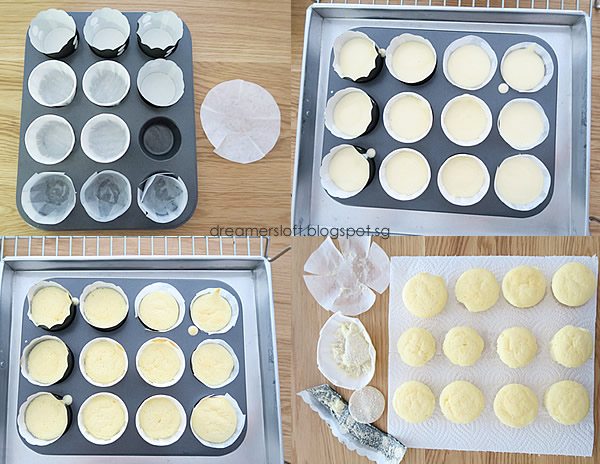 In terms of taste, these cakes were good, a tiny bit drier than batch 5 but tasted great nonetheless. However, they failed aesthetically. 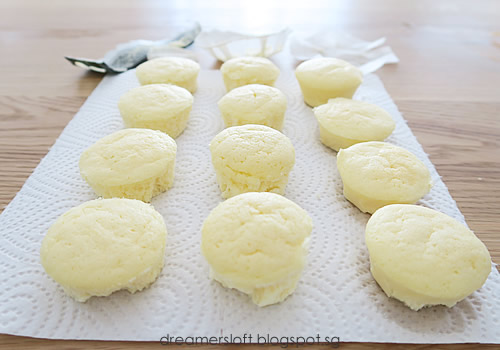 At the end of this whole exercise, my conclusion is, it's not exactly efficient to bake this at home (and certainly not economically viable), because it takes too much energy and effort just to make 12 pieces if I want them to look good aesthetically (like those sold commercially). Each batch of 12 took at least 1.5-2 hrs including preparation (cutting individual pieces of parchment paper and aluminum foil to cover and line the cheesecake pan), baking (one hour bake time) and cool down.

But then again, it's very satisfying to be able to churn out these petite size cakes that melt-in-the-mouth, using ingredients that I'm assured of, and most importantly, my kiddo loves it very much (and friends who tried it claimed that it tasted better than the ones sold at Lavender Bakery, wow!).

Actually if one is not very particular about how the cake looks, it's actually ok to use normal muffin pan and cupcake cases, just that I'm sometimes a tad OCD and perfectionist.

I guess I will bake it from time to time and stash it in the freezer as treats or something (if they can last that long, most of them got snatched up by the kiddo very quickly).


Anyways, the HB just saw a video of the jiggly wobbly cheesecake from Uncle Rikuro in Osaka and said he wants to try it! Ok, it's back to the kitchen for me -_-" Probably it would be easier to bake the cheesecake in whole than individual pieces? Will share my experience if I manage to bake it successfully. Wish me luck! 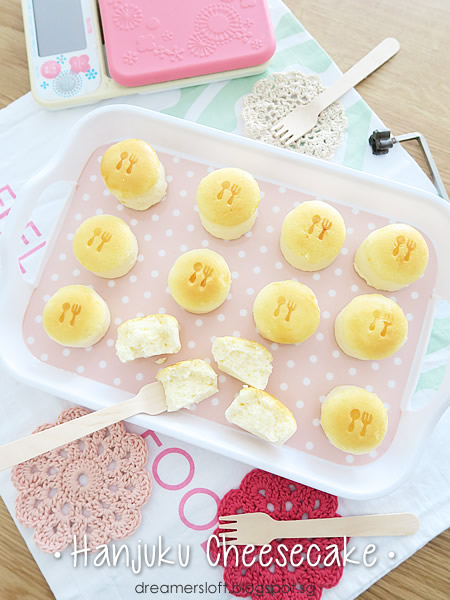 Posted by daydreamer at 3:25 PM